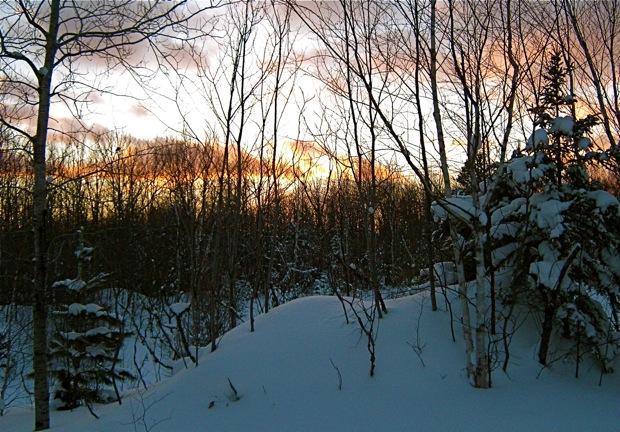 .
How else other than combining it with the sequel to the story would I get you to look at a post about Liver and Onions??
.
The final morning at the Sandstone cabin arrived so we packed up our supplies and readied them to be hauled out to the car parked about 130 feet away.  I took the first load out.  When they heard the cabin door creak the dogs came running out of the bird blind, bounding towards me with tails spinning looking to any observer like happy canines greeting a fellow member of the pack.  This was a HUGE change in their behavior.   But as they got closer they crossed an invisible line and remembered they were afraid, reverting to the scary-barking of fear.
.
I continued to the car, opened the doors to begin packing, and they followed me barking and snarling.  Suddenly they became quiet.  They approached the car with tails wagging, walked around it and were very interested in snuffling around the interior.  The vibe was mellow and I thought perhaps Scott was right, perhaps there is hope!  Perhaps they just needed reminders of their former life.
.
Then I turned to walk back to the cabin…
.
They blocked my way with extreme baring of teeth and more ferociousness than I had seen yet…and were closer to me than ever before.  I calmly talked to them and stood still for a while.  They became even more aggressive.  The younger dog gnashed her teeth an inch from my hand and for a moment I thought she was going to bite.  I’m not a person who is afraid of dogs but at that moment I experienced a flash of adrenaline and my muscles constricted with near-panic.  I thought to myself “Scott is out of his bloody mind…”   I barked back at them and eventually waved my way through the blockade, but I was shaken.  I didn’t like the idea of them knowing I had experienced fear.
.
We proceeded to pack out the rest of our gear but I didn’t go out alone, it’s difficult to dispel fear once it arrives and I knew if I was feeling afraid that it would not help the situation.  Scott walked between me and the dogs…more baring of teeth and more barking barking barking, but this time the tails were wagging much of the time.  We finished loading up and made a final trip back to the cabin for the last items.  I walked in, then Scott held open the door and invited in the aggressors.  They entered!  The younger feistier one first, then eventually the older one.
.
Quietly they walked around and sniffed the perimeter, the nooks and crannies.  Snuffling, calm, quiet.   Then the younger shepherd walked over to Scott and nuzzled her nose into his hands.  In that instant our hearts shattered.  Tears rolled down my face, and I was certain Scott was crumbling too.  The older shepherd sidled up to me and did the same, nose in in my hands for some loving attention.   In those few seconds everything changed, something in them melted, glimpses of relief and memory of vulnerability overtook their learned need for protection.  Their muscles relaxed, our muscles relaxed, and we were there in a moment that words cannot describe.  We were seeing each other.
.
Now there was no question we had to see this through.   We drove to the Audubon Center (it was their cabin) to explain the situation and they called around to find a shelter.   One of their interns volunteered to take on the project of meeting the dogs and transporting them.  Everyone there saw the importance and urgency of this and we were incredibly grateful!
.
The intern drove out with us to the cabin.  After initial aggressive behavior to defend their turf, the dogs once again followed us into the cabin and we sat together for quite a while, just hanging out.  Just being.  We humans are so impatient.  We forget that trust takes time to build, and we were asking those dogs to leap over their abandonment trauma and trust again and again in a very short amount of time.  We were asking a lot but their lives were at stake.
.
After an hour or so the Intern brought the Center’s van nearer to the cabin.  We opened side door, let the dogs out of the cabin and they hopped into the van like they had been on a hundred car rides: no bared teeth, no growling, no barking.  They had known a home, they had known love, they were probably not abused but just abandoned or lost and we felt like their chances of surviving were better than most.   We then said our (emotional) goodbyes and headed north to Duluth, utterly exhausted.
.
This week we heard they were doing well in the shelter and may be transferred to a Shepherd Rescue Center nearby.   Apparently there was a reason we had to make a detour from Wisconsin and instead make our first stop at a little cabin in Sandstone, Minnesota.
.
. 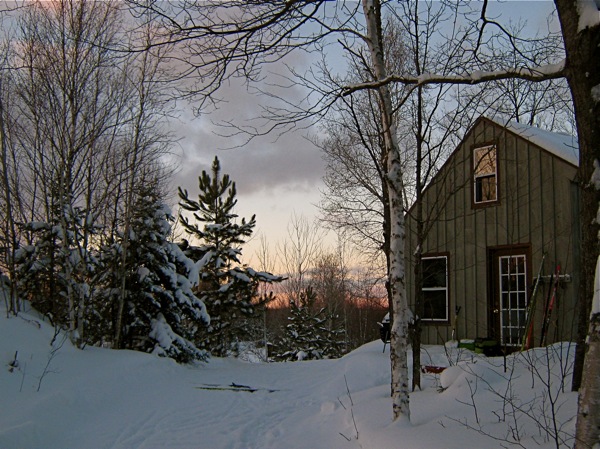 .
.
These are more photos of our stay at the primitive ski-in cabin ABR near Ironwood, MI.
. 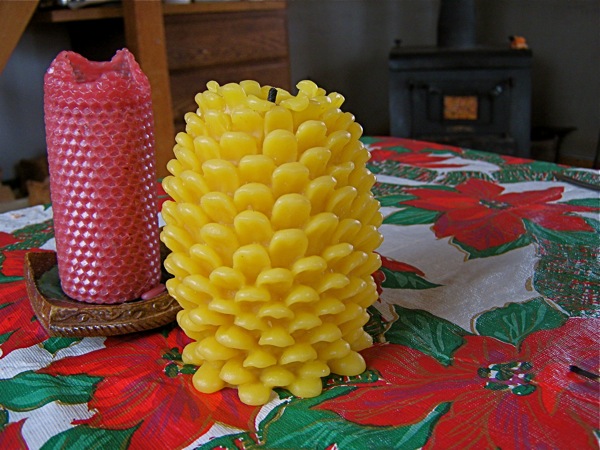 .
Our nighttime lighting with the woodstove in the background.
. 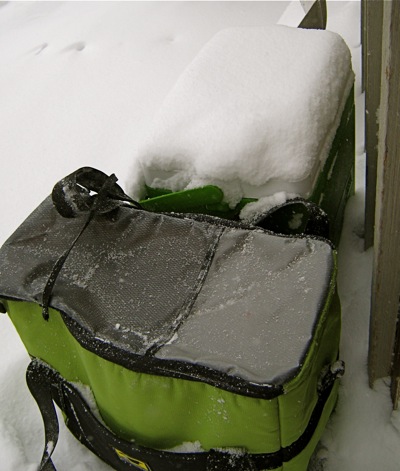 .
The refrigerator (which is moved in and out to try and regulate the temp) and the freezer (covered in snow).
.
.
.
Liver and Onions?!?
We always eat liver and onions on our ski trips.   Once a year we buy a side of local beef, and the healthy liver is regularly included in the deal so we have a stockpile accumulating in the freezer.  There is something about spending lots of time outdoors in the winter that makes us crave protein and minerals, and liver is packed with both.
.
Yes I know many of you are tuning out right now!  It took me a year to muster up the courage to actually post this.  Ah well.  I never said you would like everything…
.
. 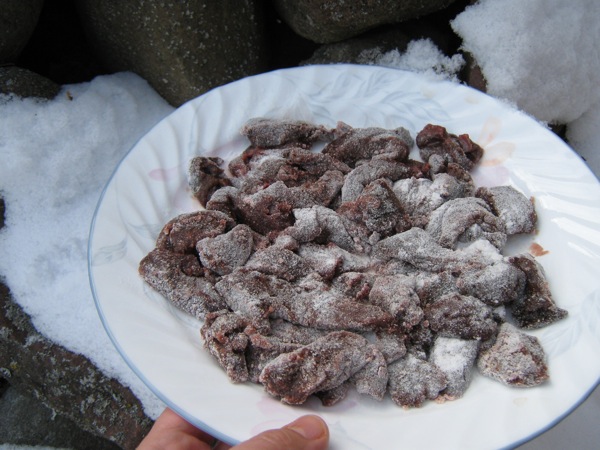 .
I remember days that I was home from school (perhaps in kindergarten or home sick) my parents would sometimes eat liver and onions for lunch.  Mom knew better than to try and coax five girls into eating organ meat, but she and dad seemed to enjoy it.
.
They liked it so I would try it.   The texture is odd but I was just happy to be there alone with them eating lunch.  I remember the smell of real butter in the pan, and the smell of onions as they fried in that butter.  I suppose you could say there are warm fuzzy memories attached to this dish, as bizarre as that might be.
. 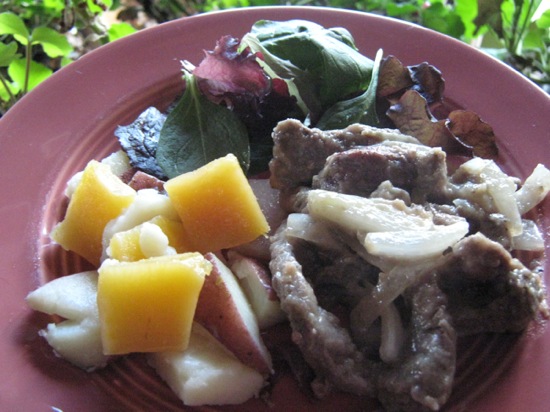 Prep Time: 15 minutes    Cook Time 15 minutes
.
Slice in long strips:
1 pound liver
Toss with:
Rice flour
Salt
Pepper
.
Melt In a heavy saute pan:
2-3 Tablespoons butter
Add:
1 large onion, sliced lengthwise
Saute for a few minutes, then add:
the Liver
Cook on medium heat for a few minutes.  The liver should be cooked but not hard.
Stir in:
A few tablespoons of Water to make a gravy
Taste and adjust—sometimes I add a little granulated garlic
.
Serve with:
Cooked Turnips and Potatoes
Green Salad or Sauteed Greens
A long ski and a Sauna
A good night’s sleep
. 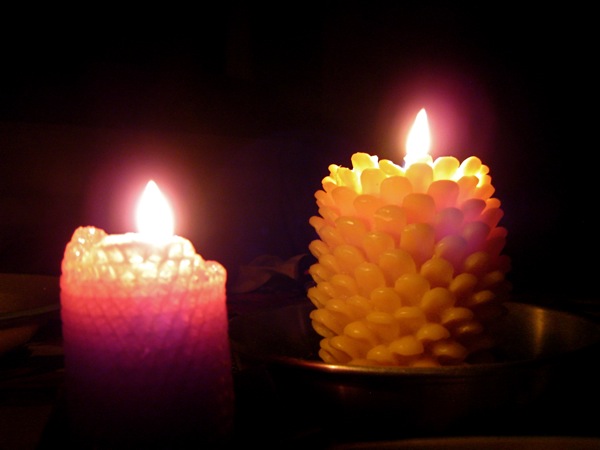