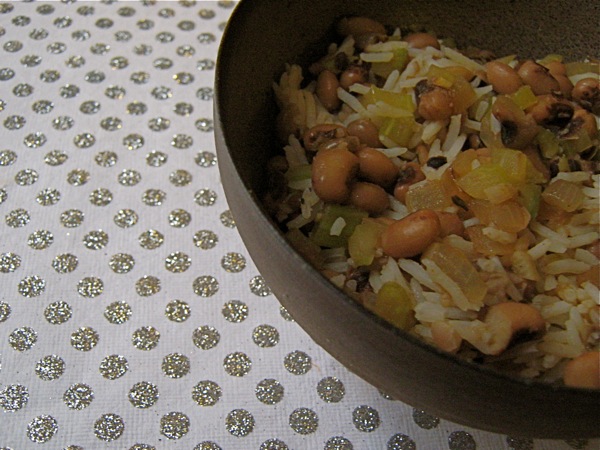 There was an idyllic snow on Christmas eve, and after walking home from a Norwegian Jule dinner on quiet streets in the falling flakes, we awoke to more snow and a perfect day for a beginning-of-season ski on that slippery powder.  As we skied through the woods we watched a gorgeous orange sunset through dark silhouettes of bare trees—but I forgot to take a camera!  So no photos from me, but here is a link to incredible snow art by Simon Beck—-wow is all I can say.

Back to the beans…

A few of the reasons why it’s considered lucky to eat blackeyed peas on New Years: 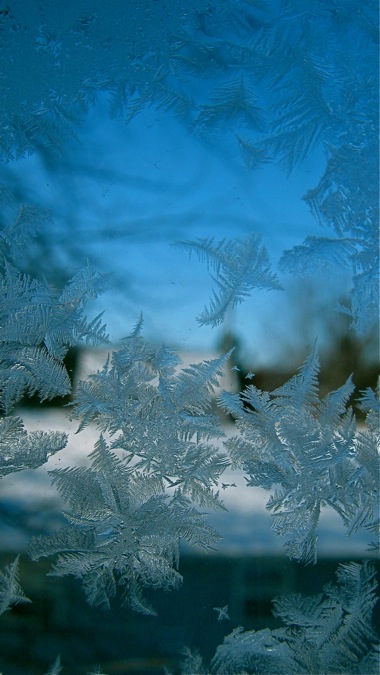 Why the name Hoppin’ John?

Most food historians generally agree that Hoppin John is an American dish with African/French/Caribbean roots. There are many tales or legends that explain how Hoppin’ John got its name:

–It was the custom for children to gather in the dining room as the dish was brought forth and hop around the table before sitting down to eat.

–A man named John came “a-hoppin” when his wife took the dish from the stove.

–An obscure South Carolina custom was inviting a guest to eat by saying, “Hop in, John”

–The dish goes back at least as far as 1841, when, according to tradition, it was hawked in the streets of Charleston, South Carolina by a crippled black man who was know as Hoppin’ John.

The flavors in this recipe are similar to the Red Beans and Rice you might eat at Mardi Gras with thyme, allspice, bay leaves, and hot sauce.  There are other versions of Hoppin’ John that are much simpler in their seasonings.

Blackeyed peas have an earthy flavor and hold up well to the strong flavors of a hot sauce.  I like to use either Louisiana Hot Sauce, Crystal Hot Sauce, or Frank’s Red Hot Suace—all of these are a fermented chili/vinegar condiment that are very similar to each other, and all of them are less spicy than Tabasco, giving the flavor without as much fire.

Hoppin’ John can be served either on top of rice or mixed into the rice like a pilaf or jambalaya. 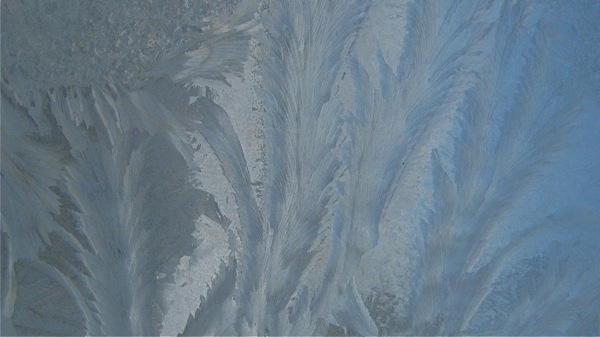 Every day there is art on my window.

The Best of Luck to you and yours!

Prep Time: 15 minutes   Cook Time:  a few hours to soak; approximately 1 hour to cook the beans; 10 minutes to saute and simmer the rest

Soak for a few hours:

Simmer together in a pot:

Add more liquid if needed, and cook until beans are tender.

1 cup Bacon or Ham, diced (optional if you want to keep it vegetarian)

1/2 teaspoon Sea Salt (this will vary if you use ham or bacon, or have heavily salted beans)

Mix in to the vegetables:

Taste and adjust—if you used canned beans they will have less flavor and you may need to add more spices.

Ham or other Pork