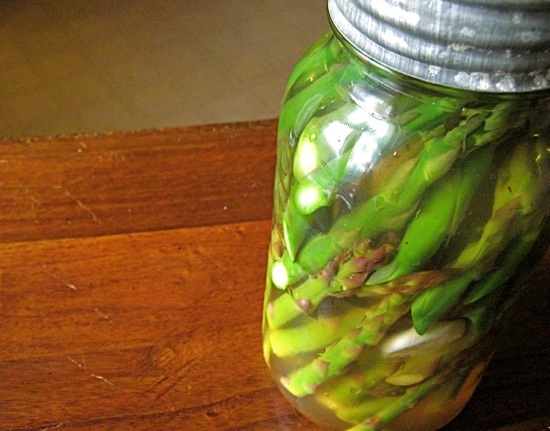 Despite the occasional April snowstorm our landscape is about to explode into electric GREEN.  It’s been patiently waiting and waiting and the time is nigh.  Later this week I’ll plant my onion sets for green onions —I keep harvesting the shoots throughout the spring and the bulbs keep producing more.  But I rely on others with more space for growing the asparagus, especially since I don’t know where the secret ditch patches are around these hills.

A few historical tidbits from the wiki about this amazing flowering perennial:

-Emperor Augustus created the “Asparagus Fleet” for hauling the vegetable, and coined the expression ‘faster than cooking asparagus’ for quick action.

-A recipe for cooking asparagus is in the oldest surviving book of recipes, Apicius’s third-century AD “De re coquinaria, Book III”.

-Asparagus has been used as a vegetable and medicine, owing to its delicate flavour, diuretic properties, and more.

-It is pictured as an offering on an Egyptian ‘frieze‘ dating to 3000 BC.

Asparagus is best when eaten right away, simmered in water or steamed, served with just salt or maybe some butter.  Nothing more is needed.  But preserving it for another day is my goal this week—I will be using it on an antipasto tray in a few weeks. 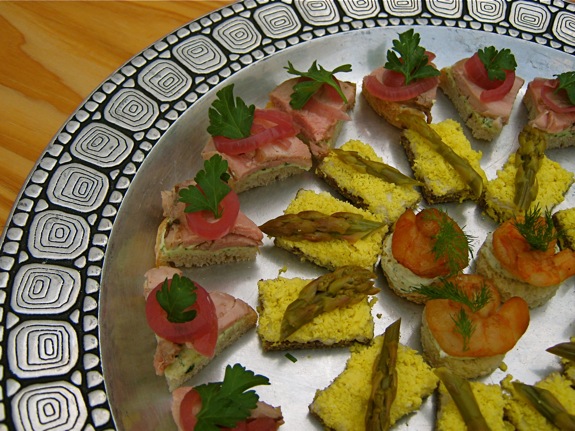 This is a photo from last year’s appetizers at a Sytten d Mai celebration (Norwegian Independence Day).  The Pickled Asparagus is on top of Rye bread with Anchovy Butter and Grated Egg Yolk.  The other treats on the tray are a Smoked Pork Tenderloin Canapé with Parsley Shallot Butter and Pickled Onions, and a Smoked Shrimp Canapé with Dill Cream Cheese.

I love my trays.  For years I’ve collected them from Wilton Armetale, a Lancaster County based company that makes metal alloy servingware with an appearance similar to pewter which can handle both the freezer and the oven.  They’ve highlighted numerous designers over the years so the styles are varied—from ‘colonial American’ and to modern and fun like this one.  These days I look on ebay for older versions that were made in Pennsylvania before they moved the factory overseas a few years ago.

Be sure to enjoy the spring asparagus as it comes in, then pickle some to savor later on!  These snappy buddies would be great as a snack or in a pasta salad on a summer picnic.  Hmm, I may have to try that.

Trim off the tough ends and slice into 2 inch pieces:

Heat a pot of water to boiling.

Blanch the asparagus in boiling water for 10 seconds.

Immerse the asparagus in cold water to stop the cooking process.

Heat in a sauce pan, stirring occasionally, until the sugar and salt dissolve:

In a sterile quart jar add:

Pour the vinegar mixture over the asparagus and close the lid.

Store in the refrigerator, or use a water bath canning method to seal the jar.

Asparagus should be ready to eat within a couple of days.

I still have zinc lids from my mother’s canning days