I was introduced to this dish by my friend Kristen years ago when she created it as a special for the deli.  She made it with peanut butter, served it room temperature and it was a favorite of the clientele.

Dan Dan Mien, or ‘peddler’s noodles’, of course has many renditions and adaptations from its origins in the Sichuan region of China.  Sometimes it’s noodles in a hot spicy broth like a soup and sometimes it’s made with a tahini or peanut butter paste and served with all of the components piled on top of noodles so the diner mixes everything together themselves.  To me they look like two completely different dishes, and from my understanding this dry rendition is the more “Westernized” version.

In my first attempt to recreate this I used tahini because I read it was more traditional, but have to admit that I like the peanut butter version better.  Tahini can have such a bitter aftertaste that it was almost overwhelming.  This has led me down the path of learning that not all tahinis are created equal.  Read more about recommended sesame seed pastes here. 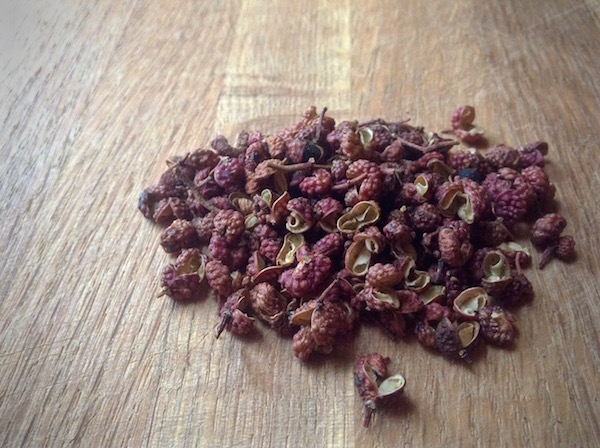 Sichuan peppercorns are an important ingredient to this dish and though they do have a tingling effect on the mouth they are not as spicy-picante-hot as one might think from having tasted firey Sichuan cooking.  Also known as Chinese Coriander or Chinese Prickly Ash, Sichuan pepper is in the rue family (unrelated to Black Pepper) and is one of the five ingredients of Chinese Five Spice along with Star Anise, Cinnamon, Clove and Fennel.  It is a delectable addition to many dishes and can even be used in sweet desserts.  Serious Eats lists some fabulous ideas for the peppercorns (infused in honey!) that I may have to try out in the very near future.

For an extra tasty step you could make your own chili oil.

Toast red chili flakes or whole Chinese chilies in a saute pan until they barely begin to smoke (be careful not to breathe this in!).  Add this to a food processor with a mild oil like canola, grapeseed or sunflower and blend.  Store for at least a few days to let the flavors merge into the oil. 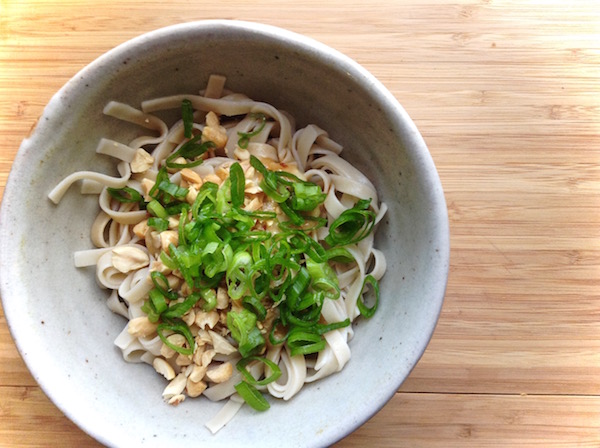 When making it in the deli we would mix everything together and serve it topped with green onions, peanuts, and sometimes vegetables.  It was easier (though less traditional) to make and to serve with the sauce already on the noodles.  I’ll leave it up to you which way you want to serve it—making a sauce then tossing it together, or drizzling and stacking all ingredients separately on each individual serving.

Cook as per instructions:

14-16 ounces of fettuccine noodles (I like Tinkyada gluten free) or Udon noodles, or fresh Chinese noodles (these would not be gluten free)

Rinse with cold water and toss with a little oil to keep them from sticking together.

Mash together in a bowl:

1/3 cup Peanut Butter (or tahini, or half of each)

Alternatively you can mix everything together before serving.

Another photo of Scott’s circles for some New Year’s bling. 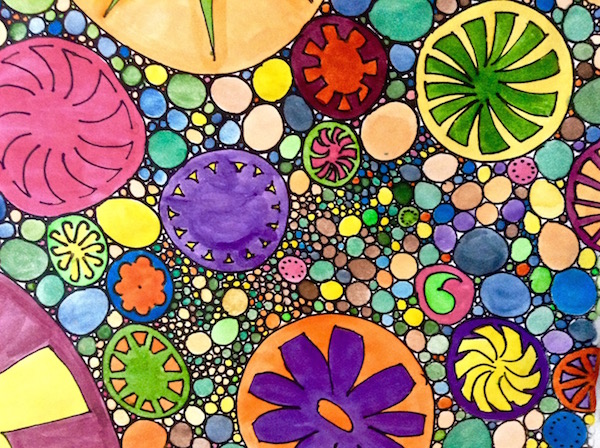