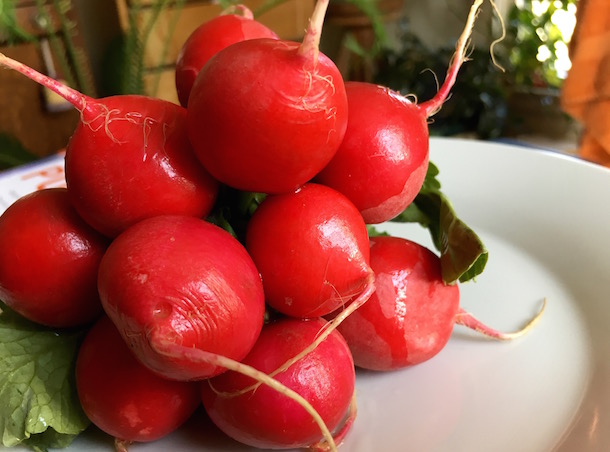 Looking out my window at the mid-April snow drifts it seems hard to believe that within a few weeks we might be seeing local radishes here in the upper midwest. Thank goodness for hoop houses and determined farmers! We seem to be in a perpetual time loop stuck in late February, but for me without the fun parts of being in a location with ski trails.

Radishes and vinegar together—this is not for the faint of heart! Actually I think the pickling process tones down the burning hotness of the radish. These are a good little condiment for a variety of dishes that need a sidekick with a kick.

The hotness of radishes explained in the words of Esther Inglis-Arkell:

“Radishes may seem spicy — but they’re not. They don’t have any spicy flavor compounds in them, the way chili peppers do. So why do they taste spicy when you bite into them?

The radish is an entirely objectionable vegetable. It provides almost no energy, has the density of a marble, and tastes like pepper spray. The radish is eye-wateringly spicy every time you bite into it. But when you don’t bite into it, it isn’t spicy. And no, that’s not semantics. The radish itself doesn’t contain capsaicin, or any other spicy molecule. If left alone, it’s completely bland.

The molecules that give us a peppery jolt when we bite into the radish are allyl isothiocyanate, which do not exist inside whole radishes. Instead, the radish’s cells are full of glucosinolates. These compounds contain sulfur, so they have the potential to give us that nose-tickle we get from spicy foods, but they don’t give us what we think of as a radish flavor.

Other parts of radish cells contain myrosinase. When a chemical compound ends in “ase” you can bet its an enzyme, which means it will go to work on the molecules around it. Myrosinase is kept contained in its own little chamber until someone bites into the radish, or slices it, or crushes it up. The damaged cells spill out myrosinase and glucosinolates, which mix together. The enzyme breaks down the sulfur-compound, which results in allyl isothiocyanate, and the spicy kick that we taste when we eat radishes.”

The last of my dill seed has been hanging out on a shelf since last fall, waiting to be used. The seed has a far more potent flavor than the weed and one can taste hints of others in same Apiaceae family such as caraway, fennel, anise and cumin. This is a powerhouse family in the spice spectrum and all of these seeds make appearances in countless cuisines of the world. Other seasoning combinations can be used with the radishes, I just happen to have these in the cupboard and they go well together. 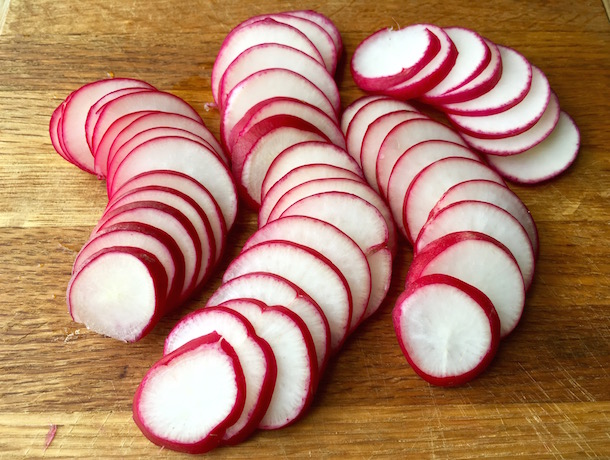 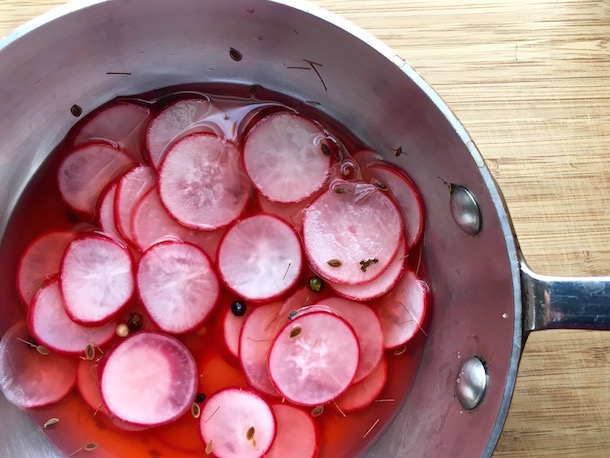 Bring to a simmer in a sauce pan:

Stir until the sugar dissolves then add the sliced radishes.

Turn off the heat and let sit for 30 minutes. Transfer to a glass jar and store in the refrigerator.

An adorable little knife I found at an art fair, the blade is just under 2 inches long. 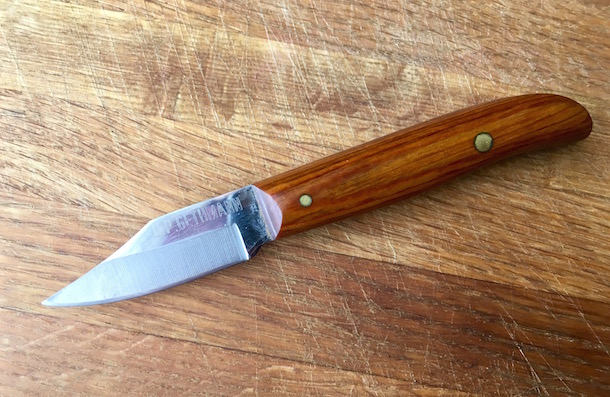 “It may be hard for an egg to turn into a bird: it would be a jolly sight harder for it to learn to fly while remaining an egg. We are like eggs at present. And you cannot go on indefinitely being just an ordinary, decent egg. We must be hatched or go bad.”