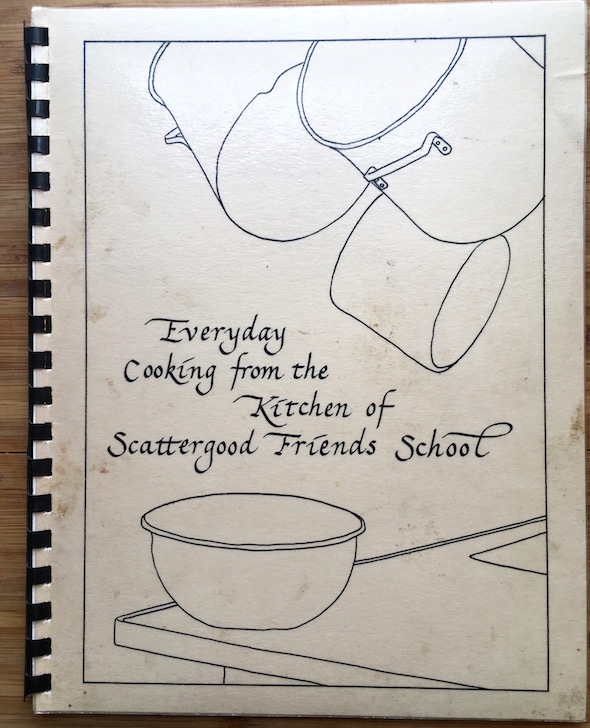 Most of my high school years were spent at a small Quaker boarding school (Scattergood Friends School) where the students participated in the chores of living in a community—in particular the cooking and cleaning tasks of daily life. Students made the bread and granola and helped prep all three meals for the entire school, it is where I was first exposed to a commercial kitchen and where I fell in love with both stainless steel and feeding others. It wasn’t until years later that I realized what a truly amazing opportunity it was!

This cookbook was created in 1983 for students, alumni, and anyone connected with the school. It’s a compilation of recipes adapted to smaller sizes by Linda Scheiber and the stunning calligraphy and drawings were done by Maxine Fredericksen, both were part of the community at the time. Those hanging pots on the cover are all still there and in use, many of them acquired during the 1950’s and 60’s, and are of the most substantial metal quality I’ve ever seen in the kitchen—you simply cannot find cookware like that anymore. 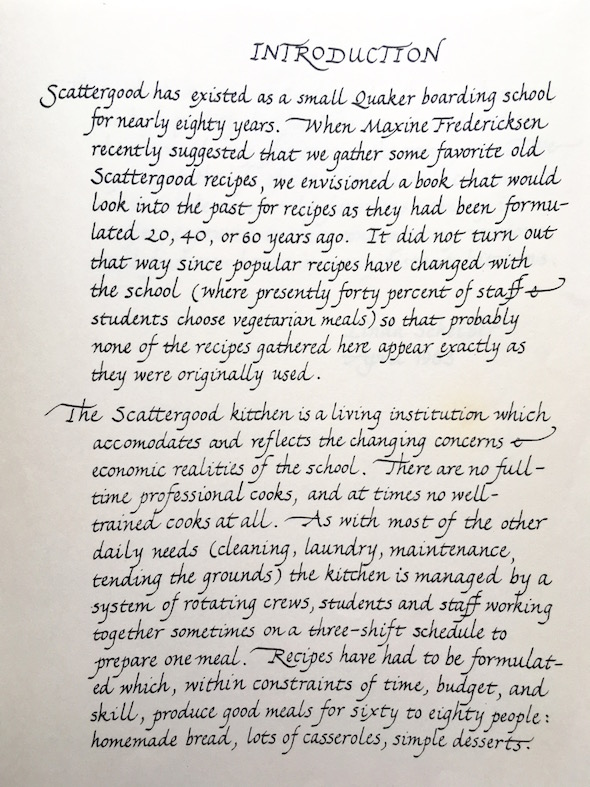 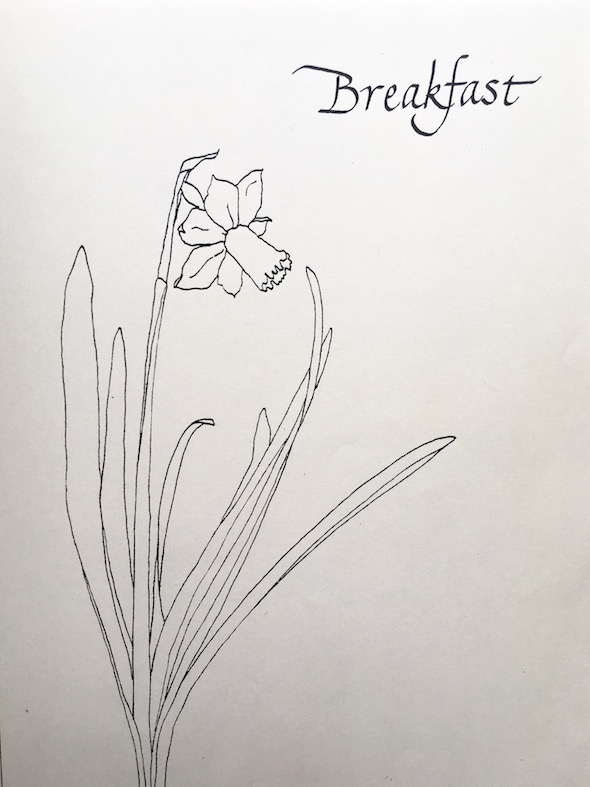 Breakfast Crew was one of my favorites during those years. We would set the alarm clock (remember alarm clocks??) for 5:30 a.m., trundle downstairs to the kitchen, and with the help of one other student or staff (accompanied by some great tunes on the ‘box’) would crank out eggs with potatoes, cinnamon rolls, or popovers, along with everyday granola or oatmeal and fixin’s for 50-60 people.

Leftover oatmeal from breakfast was incorporated into the bread of the day by Bread Crew (another favorite crew of mine) so we could enjoy the loaves at supper. The Bread Crew student had the privilege of slicing of a piece right out of the oven—to test it, of course—the bread-end nearly burnt your hand but that meant the butter melted quickly for a heavenly combination. 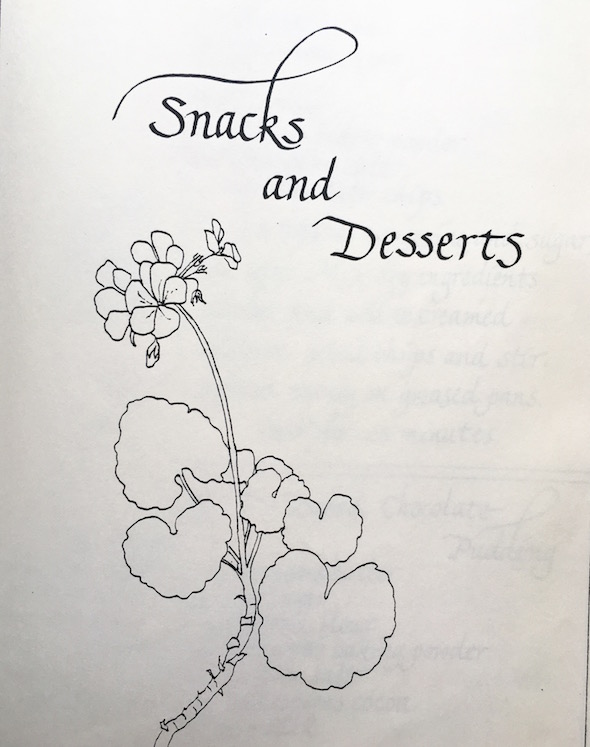 One of the most popular dinners during our era were Bereuks—ground beef and onion (or cottage cheese and onion for the veggies) wrapped in bread dough and baked into adorable enclosed filled buns. They were a tremendous amount of work and volunteers were asked to come to the kitchen during the afternoon and help assemble the pockets, it was a great time to listen to music and endlessly roll, fill and fold the little nuggets. It was the kind of community nurturing and participation that few people, I realize now, ever get to experience. And sadly….there were never leftovers.

It wasn’t until recently that I searched out the definition of a bereuk apart from the Scattergood version. Burek (or Börek, or Boureka) is the closest match that someone probably adapted to a midwestern and large-scale version. The origins appear to be Serbian, Assyrian, Balkan, and Mediterranean, all consisting of spiced meat in a flaky dough or phyllo dough.

Here are the pages of the simplified and Midwesternized Scattergood School version of this pocket meal, both for vegetarians and ‘carnies’. 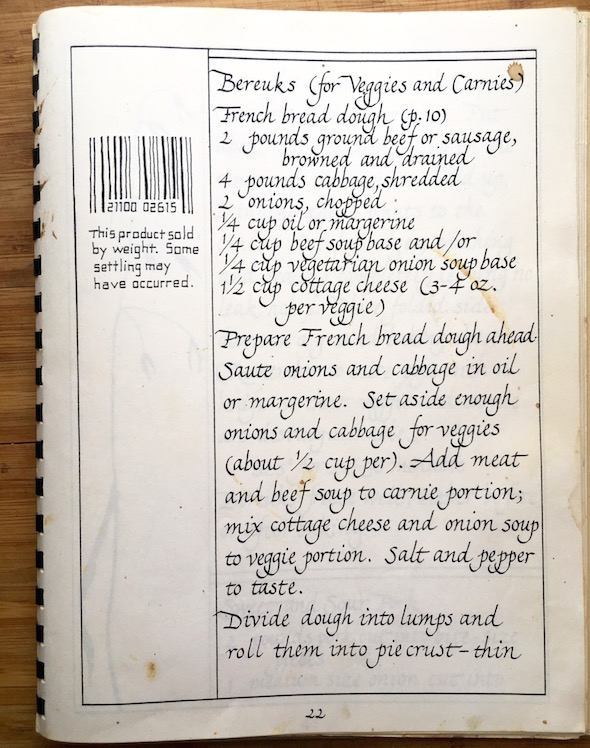 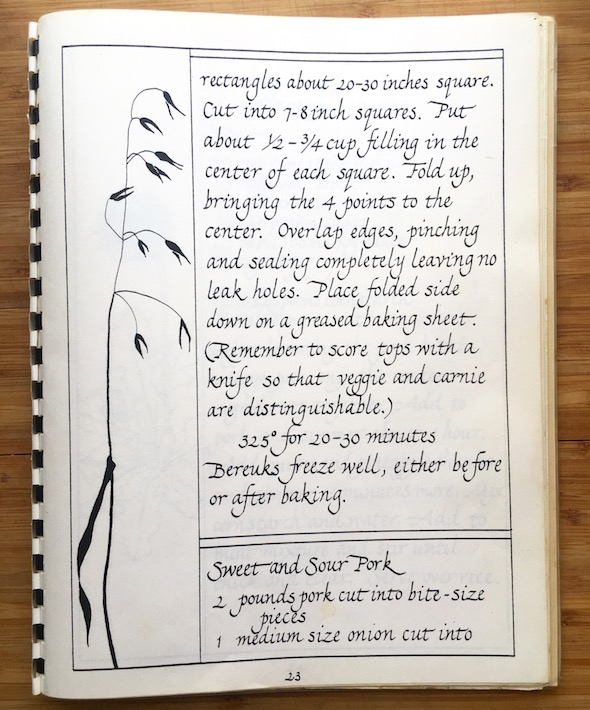 I haven’t tried making a gluten free version of these since gf dough tends to be sticky and not elastic, making enclosed buddies such as this quite a challenge. I may try using my GF Samosa dough made with tapioca flour, it’s still fussy but at least I know it.

A few more pages from the school’s cookbook—-the left column lists Food Expeditures at the school over the years, oh things have changed. 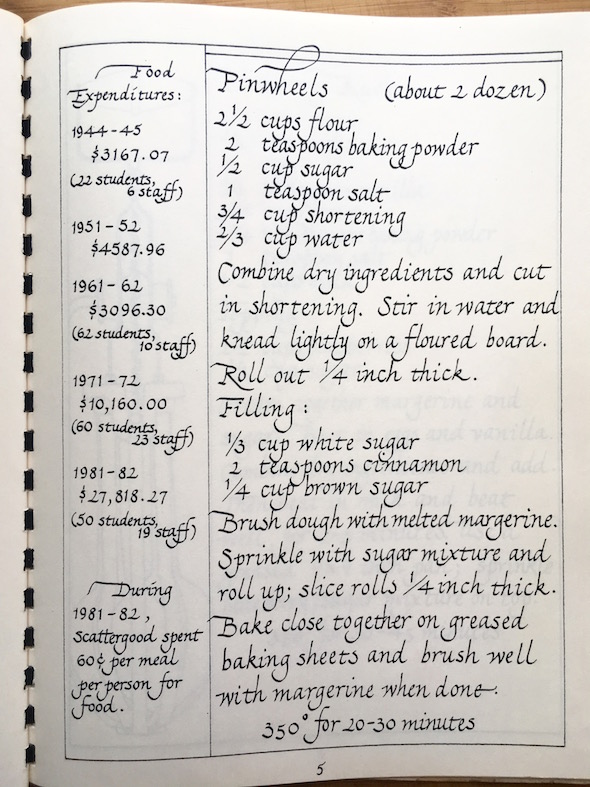 This kind of cooking was such a testimony to feeding a crowd, making it nutritious and tasty, and keeping it cheap and relatively simple so even fifteen year olds could make it. I know now how lucky I was that my early experiences of large scale cooking was for people that I loved—this is not how people generally learn to cook in the attitude-heavy kitchens of restaurants. I’m certain it helped shape my attitudes in the kitchen and about providing a good-vibe style of catering. I’m not even sure who to thank, so let it be a general sense of gratitude that I’m sending out.

I think the Hawthorn tree to which this is referring was struck by lightening this summer and had to be cut down. Hopefully the Cedar Waxwings have found another Hawthorn during this intense winter we’ve had. 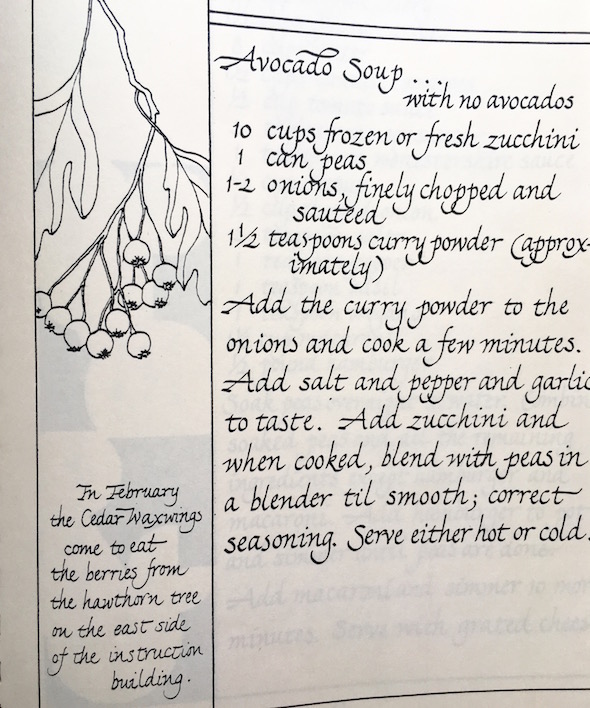 Give me the courage to do it.”