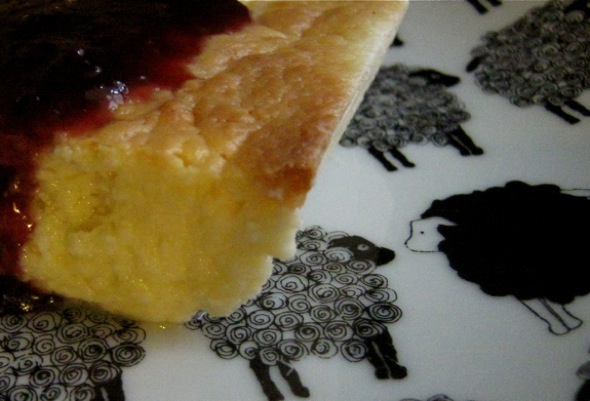 I love this plate.

Ostkaka (or ostakaka) was the Swedish cheesecake dessert we served at my friend’s Surströmming party (sour herring).  It’s another understated but surprisingly addictive Scandinavian dessert…fresh-cheese with eggs and sugar.

My friend gave me this recipe from a 1927 Swedesburg Cookbook and I swapped out the flour with rice flour but no one noticed. Here are more early 1900’s Scandinavian Recipes from the Centennial Church Cookbooks in Nebraska and Iowa. 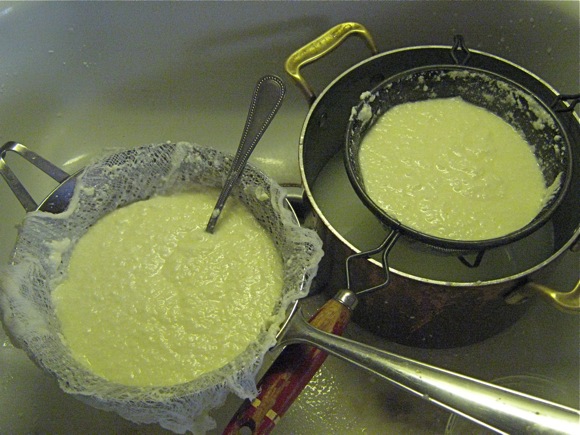 Cheese rennet contains enzymes that coagulate the milk and separate the curd from the whey.  It can be purchased in both liquid or tablet form.  Sources of rennet include the stomach of mammals, plants (figs, caper leaves, nettles, thistle, mallow and Creeping Charlie), fungi and bacteria.

I have used vinegar and lemon to curdle milk for paneer (Indian fresh cheese) and dry rennet starter for making chevre, but this was my first experience with liquid rennet.  The rennet coagulates the milk at a much slower rate and doesn’t greatly increase the acidity levels, so the resulting fresh cheese is still sweet.

My second round of Ostakaka was made using the paneer method of lemon juice to curdle the milk and it worked pretty well, leaving a light lemony taste to the dessert.  Traditionalists won’t do this…but sometimes you have to use what is around you!

Rennet can be found in some grocery and specialty food stores or ordered online.  New England Cheesemaking Supply is a great company with loads of information about all-things-cheese.  This page is all you ever wanted to know about Milk and Cream. 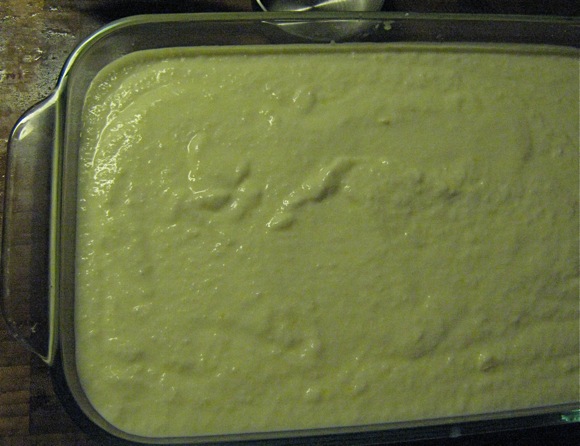 The recipe calls for raw milk or non-homogenized milk.   It will be difficult to find raw milk in many areas, but most organic milks are non-homogenized. Just for the sake of experimenting I made a second batch using whole milk that was both pasteurized and homogenized.  It worked pretty well, though the raw milk version resulted in the best curds.

Ultra pasteurized milk will not work according to the New England Cheesemaking site.  It has been heated to a higher temperature which alters the proteins so they won’t form curds, or won’t form them well. 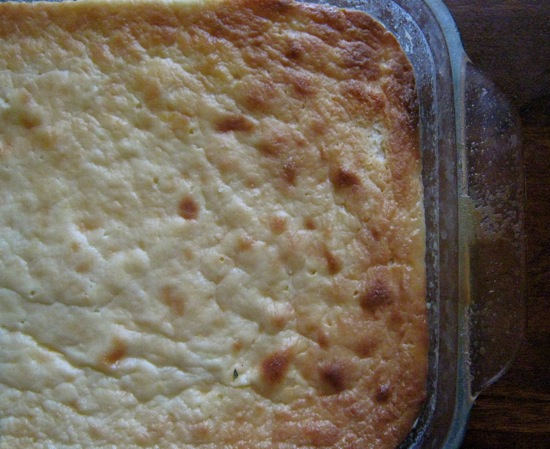 I hope the idea of making your own fresh cheese isn’t intimidating—it’s easier than it sounds!   Then add sugar, eggs and cream.  Voilà.

I found some recipes that use ricotta cheese…I’ll leave that up to your discretion.

As with many traditional dishes you will find variations of ratios and flavorings.  Some call for vanilla, almond extract, cardamom and/or cinnamon.  Again…I’ll leave that up to your discretion.

1 Gallon Whole Raw Milk, as fresh as possible (at least whole—but DO NOT use ultra pasteurized)

In a bowl, make into a thin past:

1/2 cup + 2 Tablespoons Rice Flour (or whatever you have)

Dissolve in another small bowl:

When the milk has reached 110 degrees, turn off the heat.

Whisk in the flour paste and mix thoroughly.

Add the dissolved rennet and stir gently until the milk curdles.

Let the milk sit for 1 hour to separate.

Cut the fresh cheese into small squares (if it is thick enough) and drain off the whey using a colander lined with cheesecloth.

Transfer the fresh cheese to a bowl and add:

There may be residual whey when the cake comes out of the oven, it will be reabsorbed.

Serve with a red berry sauce: Lingonberries, Loganberries or Strawberries and Whipped Cream.