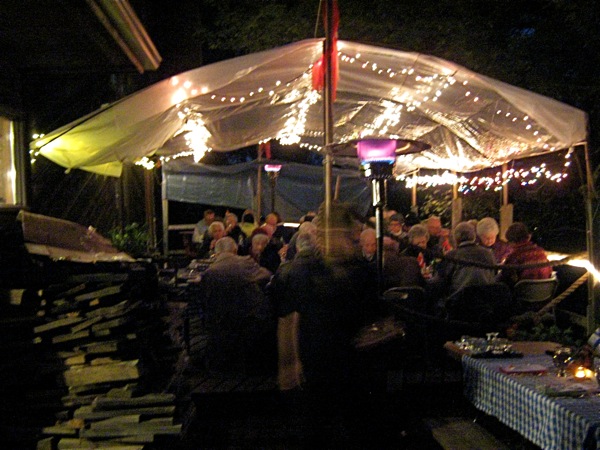 It isn’t often that I get to cater with rotting fish.

I recently helped a friend host a dinner party, a convivial Dane who loves to bring people together, concoct authentic Scandinavian delicacies and all the while nudge the comfort-boundaries of his guests.  Some examples of dinners past: a meal which included Icelandic Moss and Seaweed; another dinner with Reindeer, Marrow Bones, Blood Dumplings and live Sahti beer; a dinner of Babette’s Feast reenacted; and this time he was going to unveil a surprise that he had been planning for years—one that his guests would not soon forget.

Dining outdoors on the first day of fall in the Upper Midwest is one way to begin taking people out of their comfort zone (it went down to 37 degrees that night), but fortunately propane heaters were acquired and guests knew enough to equip themselves with their Norwegian sweaters.

Appetizers, beverages and a small fire out front greeted the diners as they arrived.  They snacked on freshly-cured Gravlax salmon with a Mustard Sauce, Messmör (whey butter) with Cracklebread, and Anchovy Butter with Cucumbers while two fiddlers played festive Swedish tunes and the sun set. 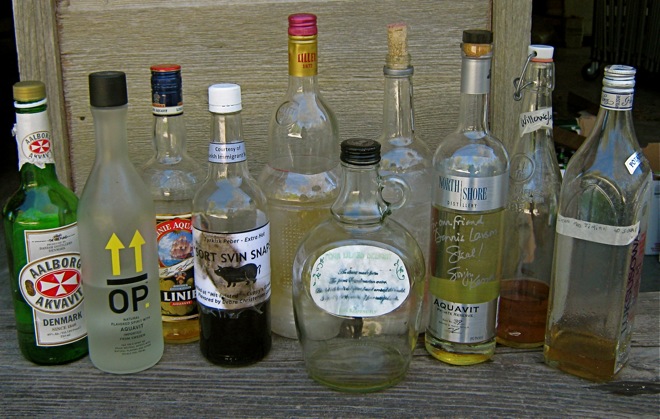 Aquavit flowed freely and came in many shapes and sizes….Linie and Aalborg of course (Norway and Denmark), another from the North Shore Distillery (Lake Superior), OP Citron (Sweden, no longer produced) and numerous homemade varieties: some with lemon and anise, others with intense dill and caraway, and others with secret combinations that the makers will never disclose.

The guests were then invited to find seats at the tables on the porch, with candles and holiday lights illuminating their way.  At each setting was the usual napkin and silverware, accompanied by Alka Seltzer and Breath Mints.  Small nervous chuckles were heard…

And then the show stopper arrived. 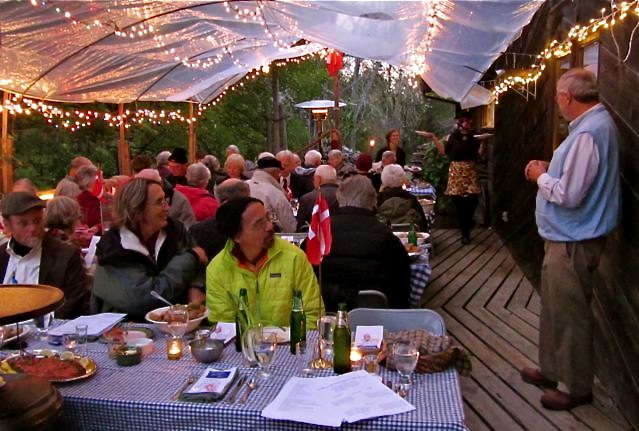 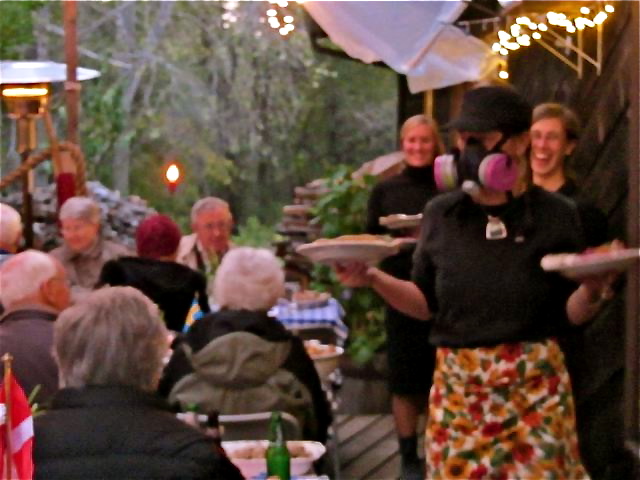 All items of the Main Course were plated in the kitchen except for one final detail…the Surströmming that was banished to the garage (even in Sweden it is not allowed in the house).   We brought the plates of food through the garage where the Smørrebrød (open faced sandwich) was topped with the infamous fetid buddies.  Here you can see us delivering the first plates, me in the gas mask for a dramatic first impression.

Surströmming is Baltic herring, first fermented in large vats, then canned…but even after canning the fermenting continues.  The cans sometimes bulge and occasionally explode!  It hails from an era when salt was expensive and fermentation was the next best preservation method.  Because of its notoriously putrid smell and explosive tendencies most airlines and the U.S. Postal Service will not ship it, so Surströmming has rarely been seen on North American soil.  Until now…

This photo shows the main course.  You can see the Alka Seltzer in the top of the photo, and the menu to the left. 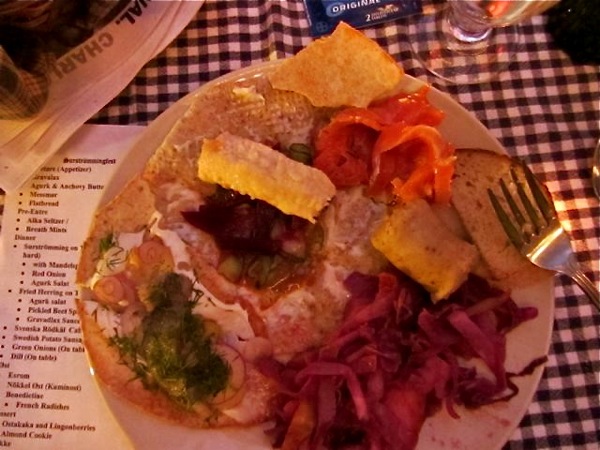 I would like to point out the bizarre Serendipity of the timing of this meal that my friend had been planning for many years.

Clockwise: The Surströmming Smørrebrød is in the lower left corner, then the oven-fried fresh Lake Superior Herring Smørrebrød (with Agurk Salat, Pickled Beets and Mustard Sauce), and the warm Cabbage and Apples seasoned with Allspice. 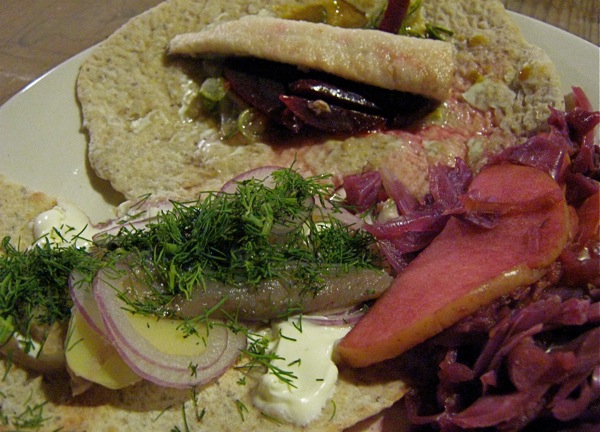 Things I learned about serving Surströmming

2) Rinse the filets in Soda Water 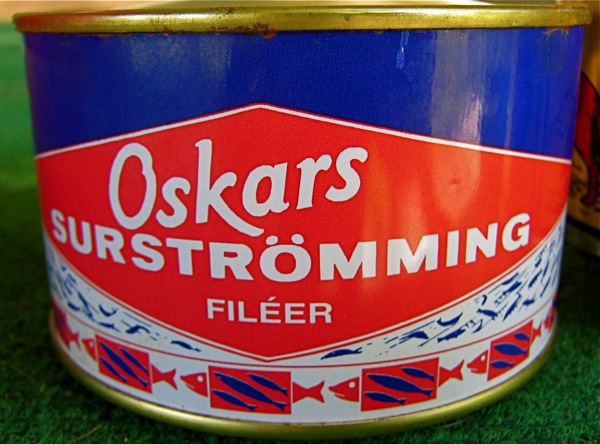 For my sake (less time in the cloud of aromas) we used only the “FILÉER” filets, from both Oskars and Kallax. 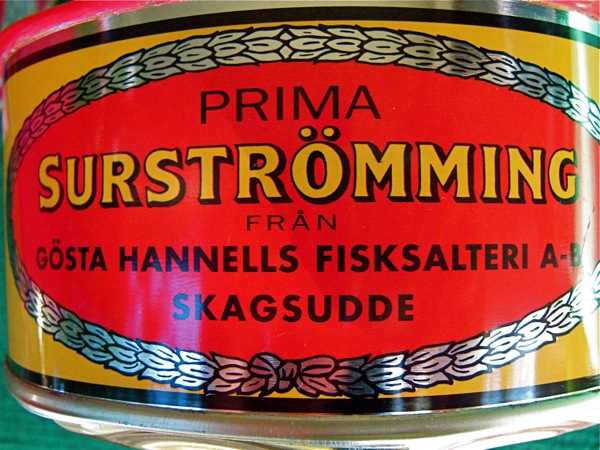 There is no ‘filéer’ listed on this PRIMA can…we did not open these cans for two reasons:

One—they were whole fish and it would be more work for me.

Two—because of internal pressure the ends of the cans were bulging so much that we were not sure how to maneuver a can opener into rounded sides. 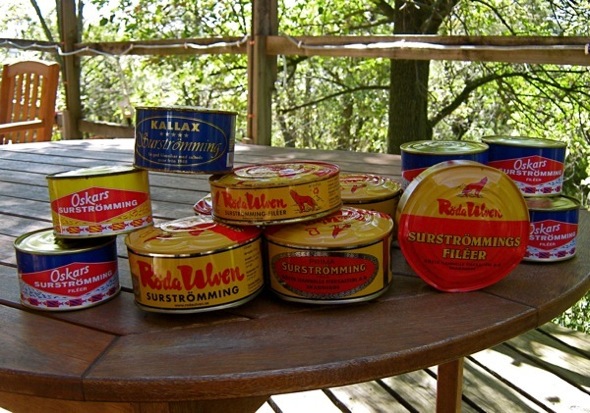 These are the leftover cans, there were 20 when we began the day!  Note the bulging ends of the larger cans.

Afteraffects?  I think my internal live culture increased 5000 per cent, and since this incoming culture spoke Swedish the gastronomical conversation seemed a bit confused.   Not unhappy, just confused.

We could not find very much information about how to serve Surströmming, but from photos we deduced a few things.  We served it as Smørrebrød (open-faced sandwich):

—Surströmming (half of a filet will do)

–We also saw tomatoes in some photos, but I forgot to put them on as we were plating.

Most of this menu was prepped by my friend, my job was to add a few items and to pull everything together in a semi-sane manner.

-Gravalax with Creme Fraiche and Dill

-Smørrebrød of Surströmming on Tunnbrød with Creme Fraiche, Mandelspotatis, Red Onion, and Dill

–Ostakaka and Lingonberries  (made with Guernsey milk) 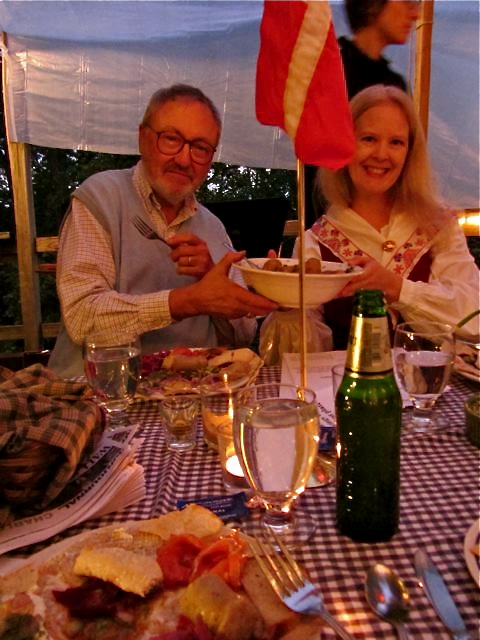 Author: Ruth
Filed Under: Other
Enchilada Pie
Roasted Potatoes and Zucchini with Cinnamon