Roasted Potatoes and Zucchini with Cinnamon 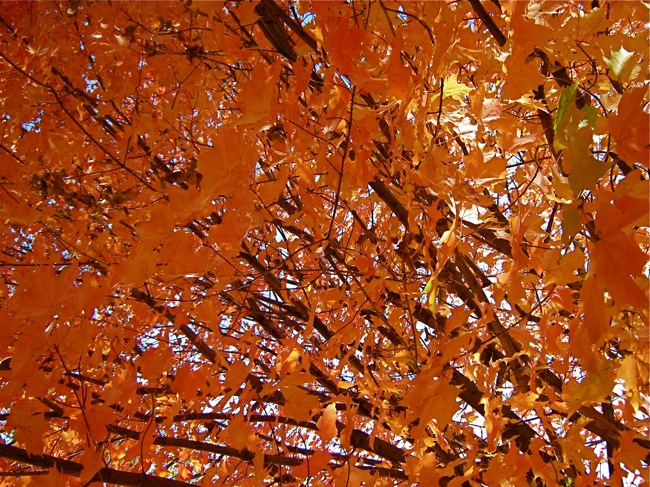 The title says it all, you don’t really need a recipe…but here I am writing anyway.

This is about simplicity: quiet food that doesn’t take much thought or many ingredients but has a hint of unusual.  When I’m at home I often find myself cooking with minimal meddling—especially this time of year when the veggies are so flavorful and I don’t want to miss out by covering it up.

Last year I catered a meal in July for nearly 400 people and the plan was to serve roasted potatoes as the starch. I thought it was safe to assume that I could get local potatoes in mid-July in the Upper Midwest…but 2011 gave us a chilly spring so everything, including potatoes, was late.  It was six days before the event and I could only get a few dozen pounds of small potatoes from local producers— I needed 150 pounds.

Moments of panic and stomach queasiness, they are simply part of planning an event.  The trick is to learn how to let those moments pass and move on before having a breakdown.   I wandered up and down the booths at the Farmers Market looking for inspiration and couldn’t help but notice the abundant piles and piles and piles of zucchini…the menu shift became apparent.  I decided to combine the 60 pounds of potatoes I could get with 100 pounds of zucchini, and life would be good. 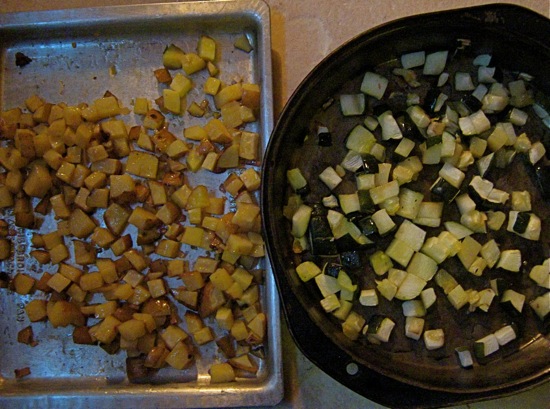 Zucchini is wet and can cook faster than potatoes so I roasted them separately.

Both are seasoned with salt, pepper, garlic and olive oil. 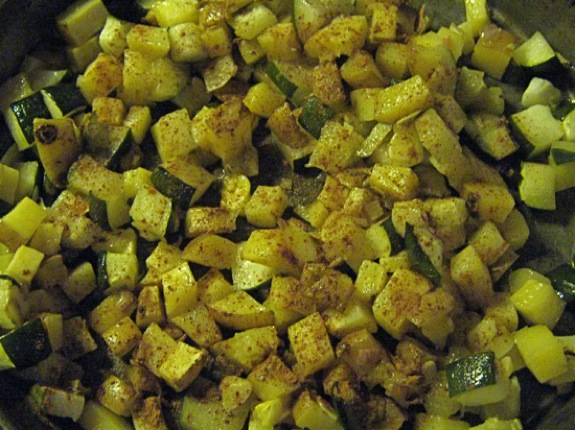 The potatoes and zucchini roasted well and when mixed together it tasted pretty good.  But the dish needed something.  A twist.

I have numerous spices that I turn to when help is needed (see the Helpers page).  I went through my little mental list: nutmeg, parsley, garlic, cinnamon…yes, cinnamon seemed right.  And it was!  People feasted, loved it, and there were no leftovers.

No measurements, just generous sprinkling.  This photo shows the idea—I actually added more cinnamon after mixing this in.  Potatoes absorb flavor, they generally take more salt and seasonings than you might think.

Summer zucchini can release copious amounts liquid while cooking—I poured most of this off before mixing the roasted zucchini with the roasted potatoes.   This zucchini in the photo was from a fall crop and was much drier. 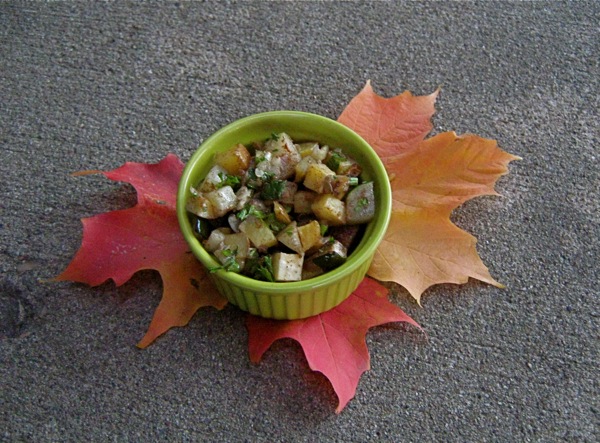 These leaves were just too beautiful to not include in a photo.

This ‘recipe’ does not include measurements, only ratios.

Prep and roast the potatoes and zucchini separately but with the same method.

Roast the potatoes and zucchini on separate pans at 350 degrees, approximately 45 minutes.

The zucchini may be done before the potatoes.

Remove from oven when both are cooked and mix together.

Sprinkle with a generous amount of:

Mix together and let sit 5 minutes.

Taste, and add more salt or cinnamon if needed.

If it tastes flat, try sprinkling a little:

The top photo is the tree outside my kitchen window, and this is from an early October walk in the woods. 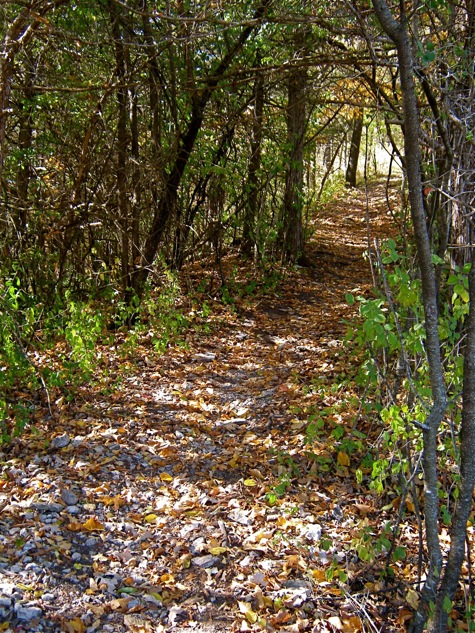 1 thought on “Roasted Potatoes and Zucchini with Cinnamon”