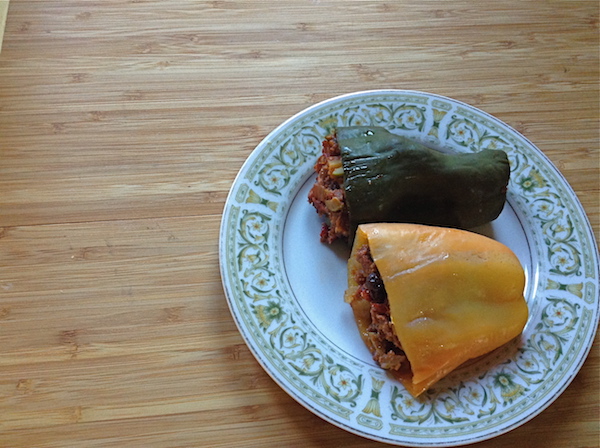 Picadillo is a traditional Spanish and Latin American dish that one could call a ‘hash’.  Ground meat, olives, dried fruit, and veggies sautéed together and served with rice or in tacos.  How handy is that?  A way to use your regional ingredients in a delicious one-dish wonder with rice, or as a filling for tacos or savory pastry empanadas.  The word Picadillo comes from the Spanish word ‘picar’ which can mean to grind, chop, sting or peck.

Though the hash is generally made with meat or seafood and served warm, years ago I made a vegetarian picadillo salad for a wedding with roasted squash, corn, beets, raisins, cumin and olives.  I suppose we can call things whatever we want when we’re the one printing the menu. 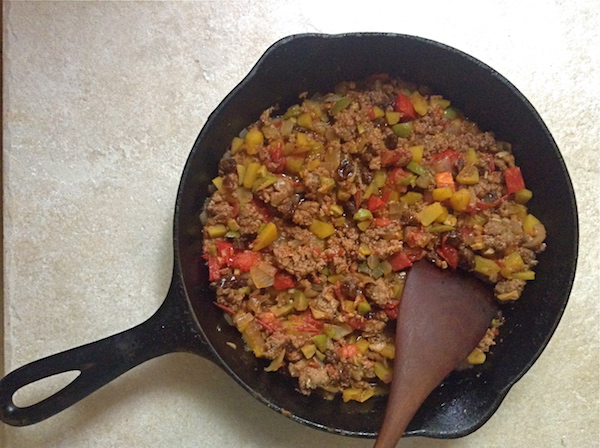 Slice the top off the peppers and hollow out the seeds.

I used both Poblano and Bell peppers as the stuff-ees. The yellow bell was tasty, but the mild spice of the poblano was awesome.  Italian roasting peppers might work as well, though they are usually long and skinny.  Experiment and let us know what happens. 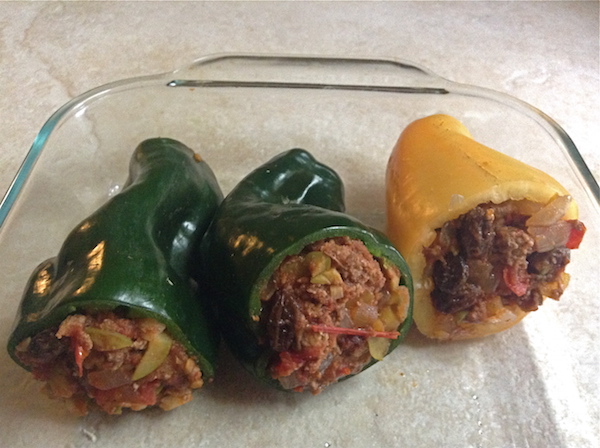 I was going to eat these with a fork but instead just picked up the peppers and ate them like a taco.  Yes!  I love self contained foods that don’t require silverware.  These might even be a handy travel food…with a napkin.

We’ll part with words from a man of wisdom we lost last week:

Cook Time: 30minutes to simmer and 30 minutes to bake

Saute in a large pan:

Pinch of Cayenne, to taste

Simmer for 20-30 minutes.  The end result should be thick but it needs time for the flavors emerge, so if it is getting too dry add a splash of water or wine to keep it from burning.

Ancho, Bell or other stuffing Peppers

Remove seeds, and brush with oil.

Stuff the peppers with the piccalilli mixture.

Bake in a casserole dish covered for approximately 30 minutes.

A totally unrelated but cool little creation by Scott. Here are more inspirational images to try at home. 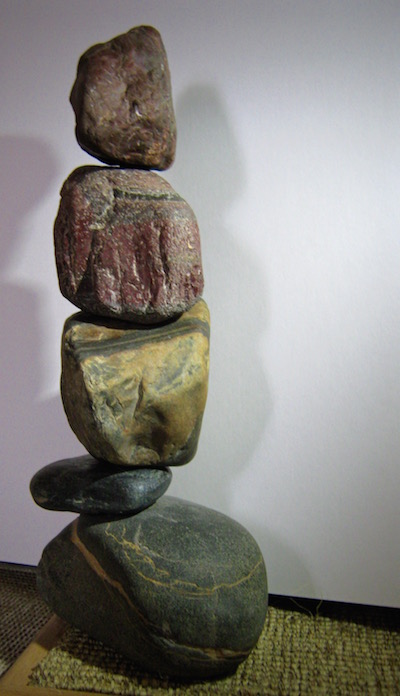