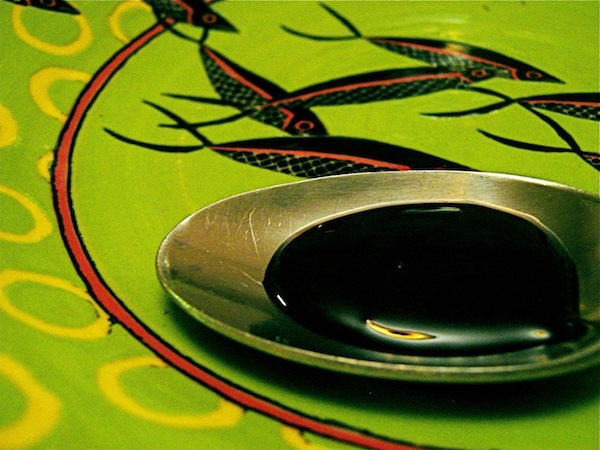 Apple Cider Syrup was the first recipe posted on this site and it seemed like time to give it another round.

Last weekend I was one of the guest demo chefs for the local foods extravaganza “FEAST” in Rochester, Minnesota and the obvious item for me to demonstrate was cider syrup.  I’m only 1/4 extrovert so I had to really charge my ‘people’ side battery and fortunately all went well.  The most amazing part of the weekend was meeting and discovering more regional producers in the upper midwest.  There were a number of great finds, but since I had been searching for regional cider vinegar for my demo I want to share with you the Vinegars of the Day. 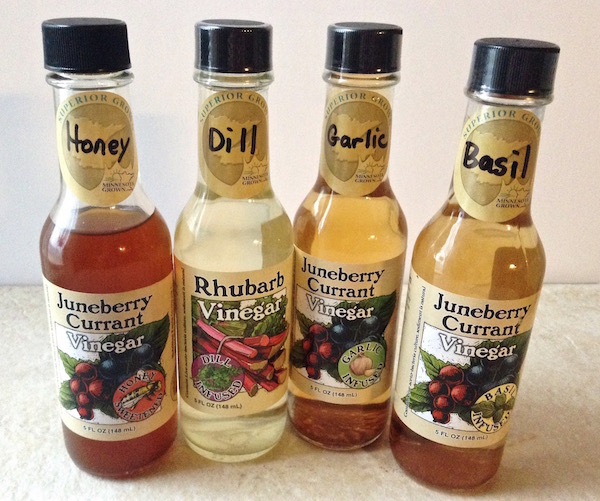 They first booth I visited had exactly what I was looking for—amazing vinegar and good conversation.  These are Rhubarb or Juneberry-Currant vinegars made by Clover Valley Farms near Duluth, Minnesota.  They raise the fruits, make the live vinegars in barrels then infuse many of them with fresh herbs (also from their farm).  The herb flavors were delicious, potent, and fresh but I found the Juneberry Currant with Honey to be the closest in flavor to a good cider vinegar and used that one in my demo Cider Syrup Vinaigrette with Roasted Vegetables.

I find it particularly exciting that people are developing regional vinegars because 1) they’re really nutritious 2) it’s a way to preserve our fruits up here in the northland 3) they provide us with flavors on the bright end of the Flavor Spectrum that we did not have to import from afar.  We’re not purists or isolationists (we do love our limes and lemons), but it is incredibly freeing to know we can continue to have our full spectrum of taste. 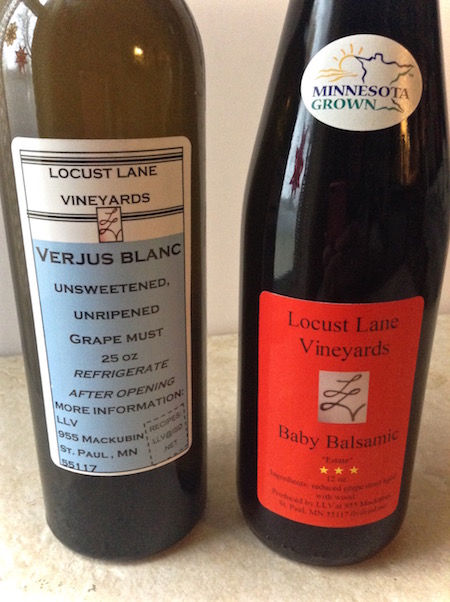 Another fun find was the Baby Balsamic Vinegar from Locust Lane Vineyards near St. Paul, Minnesota.  At the moment they offer a four-year-old “baby” balsamic that’s young and fruity, but they have barrels made from their ash, mulberry, oak and locust trees that are full of the nectar maturing for a few more years.

Their other lovely liquid was Verjus, a tart and citrus-like green grape juice that’s fantastic for cooking or in jams, jellies, and pestos.  Verjus comes from another very old practice of pruning the green grapes to promote a healthier crop of the remaining fruit, then pressing the immature grapes into a sour juice that can be used in place of lemons or white wine to fulfill that “bright” role in the Flavor Spectrum.   It’s also great in beurre blanc, vinaigrettes, or marinades. Love it!  For those of us who don’t live in California or other warm climates that can produce nearly anything, these creations are fascinating. 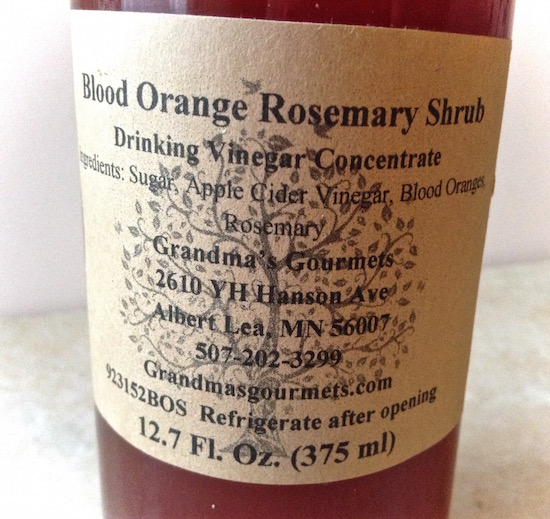 Shrub was a reeeaaallly delicious find.

The American version of Shrub is an old technique of mixing a sweetener, vinegar, and fruit juice then infusing that with herbs or spices.  This concentrated concoction also known as “drinking vinegar” can be used in cooking or added to water, carbonated water, or as a drink mixer with alcohol for a tasty beverage—these old-time vinegar laced potables like shrub and switchel are making quite the comeback in the food world.

With all of the health benefits of vinegar this would be especially perfect in water after a workout so we bought a few bottles from Grandma’s Gourmets for our cross country ski venture coming up in February.  We sometimes make our elixir of cider vinegar mixed with honey and hot water, but the addition of fruit and spices will give yet another dimension of tastiness. 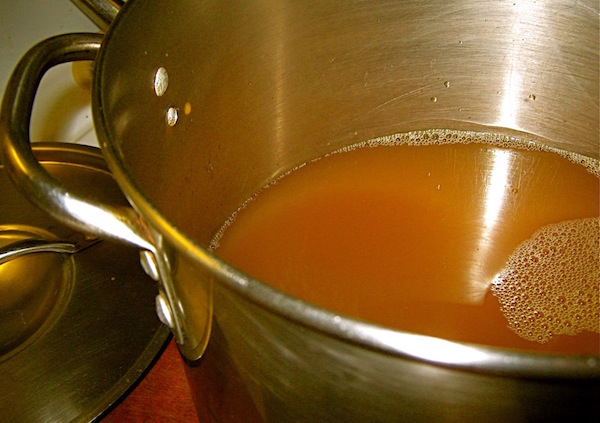 Oh yeah, back to the cider syrup…

Cider syrup has become one of my signature items for many reasons.  It’s an example of reduction—simmering off the liquid to create a concentration of flavors and a more usable item, and often reductions can be used to preserve food.  It’s using a local product (apple cider) and turning it into something with intense flavor that could almost be compared to balsamic vinegar….which up until the FEAST show I thought was something we midwesterners would find hard to call local.  And last but not least it’s really flippin’ delish.

Much can be gleaned from this little technique and it’s such a versatile product.  It’s become my example of how we can observe the flavor-roles of foods we cannot grow here and find something provincial that could fill the same role.  Check out the “Flavor Spectrum” post for more thoughts on dissecting what we taste.

Many thanks to Jean Feraca and her radio interview with Odessa Piper in the 1990’s that aired while I was driving the ridge where I could access Wisconsin Public Radio and where I first learned about making cider syrup.

That was a good day.

Cook Time: 2-4 hours depending how much you make

Simmer in a stainless steel pot:

1 gallon of apple cider (not clarified juice, not vinegar)

Simmer for hours on low heat until it has reduced to about 1/8 of the original amount—one gallon of cider will yield nearly 2 cups of cider syrup.  It should be the consistency of thin honey, then it will thicken more as it cools.

Keep a watchful eye as it starts to thicken as it can burn or become thick as taffy.  Whisk in a little more water and reheat if it becomes too thick.

It takes hours to simmer but your house will smell great!

Ways to use Cider Syrup

Feel free to comment below on other ways you have used it!

Me with an odd look on the demo stage 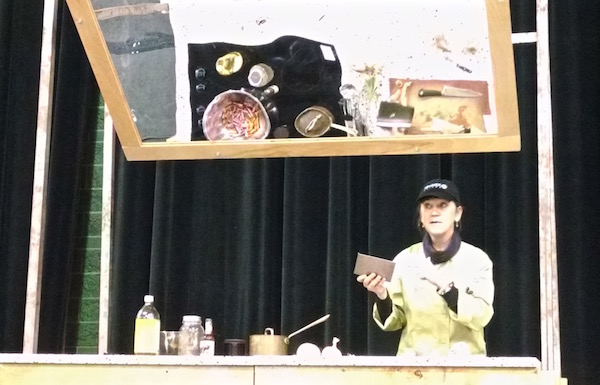 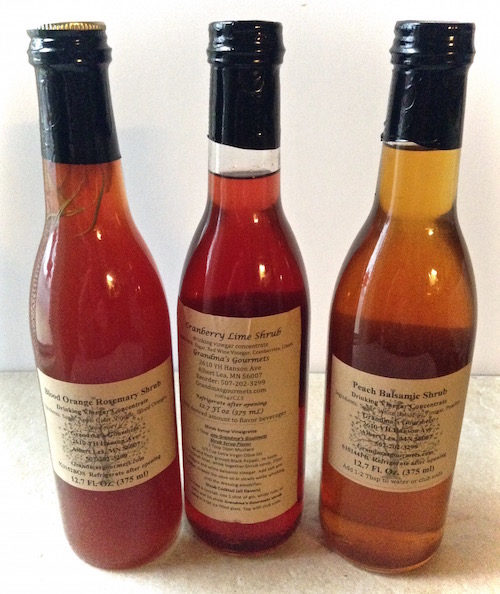