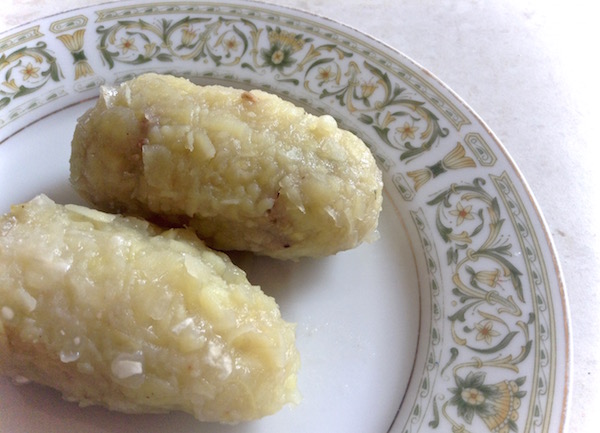 Zeppelins are adorable stuffed potato dumplings often served at Baltic holidays and they have the coolest name around.  We made these cuties for the Estonian Dinner last fall but I have to admit…I don’t have a Lithuanian grandmother therefore I really struggled with these stuffed dumplings.  Later I found some comfort to read online that other Zeppelin newbies have also struggled and I was not alone.

Though there are many versions, the dough is usually made from both cooked potatoes and raw grated potatoes, and after a few tries it became clear that a key factor in making proper dough is knowing that the term “grating” means many different things, and this definition of ‘grate’ is on the fine end of the spectrum.  I discovered on my own that the raw potatoes need to be finely grated, but later I read I should have used the zesting side of a box grater or simply blend the raw potato in a food processor.  You can see from this photo that I probably did not grate or zest fine enough and my life would have been better if I had researched more ahead of time.  Ah, hindsight.

It’s also no wonder that Zeppelins or “Cepelinai” are primarily a Holiday tradition because they require a family in the kitchen sitting around visiting and forming—- these little buddies take some time!  Save up some good stories to tell while you make them. 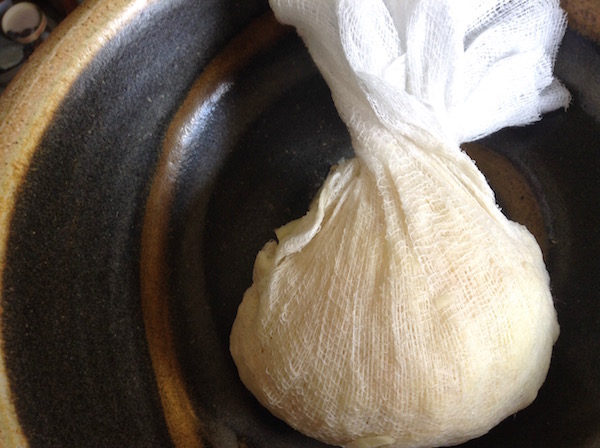 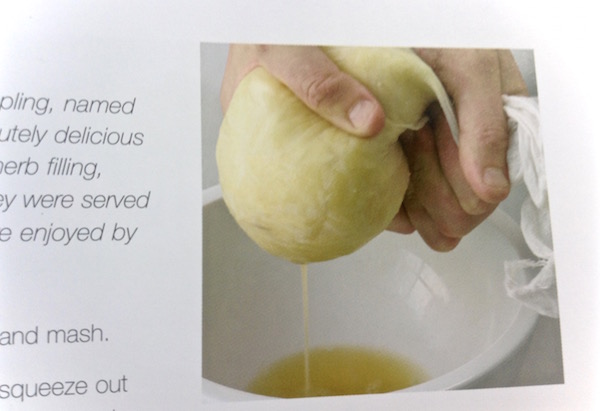 You can squeeze out an amazing amount of water from the raw grated potato, it takes a few tries and your hand may get tired, but it’s worth the effort.  Let the drained liquid sit for a few minutes in the bowl then pour off the top water—the potato starch will remain at the bottom of the bowl and adding it to the dough will help hold the dumpling together.

I sometimes use packaged potato starch in gluten free baking but had never utilized the fresh potato starch before.  Amazing, so gluey and very much like cornstarch. 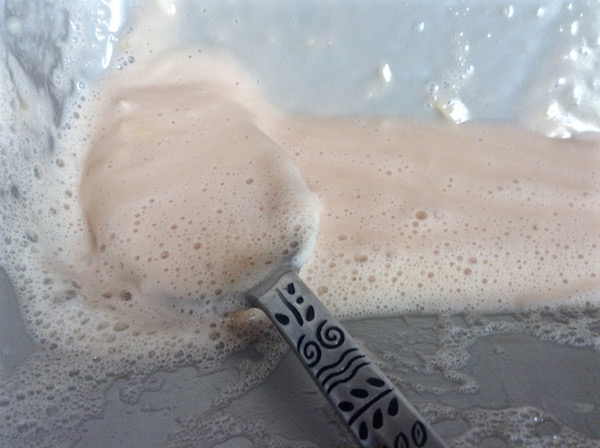 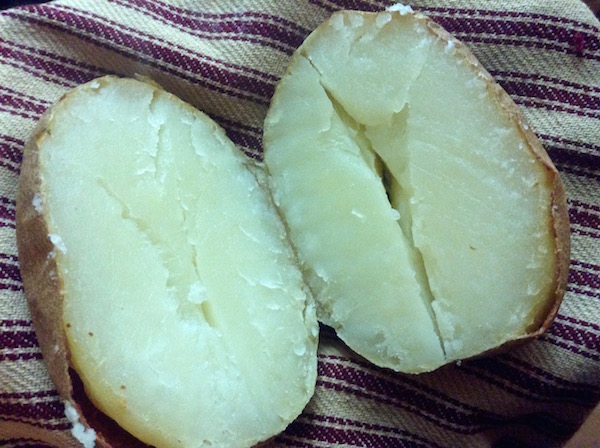 Most Zeppelin recipes call for the cooked potatoes to be boiled, but baked potatoes are dryer and might be better for this.  If you choose to bake them leave the skin on while cooking, then slice in half and scoop out the steamy filling.  Let it cool then rice or mash well before mixing with the raw grated potato.

I found it worked best to hold and shape the little dumpling nest in my hand instead of on a flat surface, it was then easier to form the Zeppelin and I didn’t have to scrape it off the table. 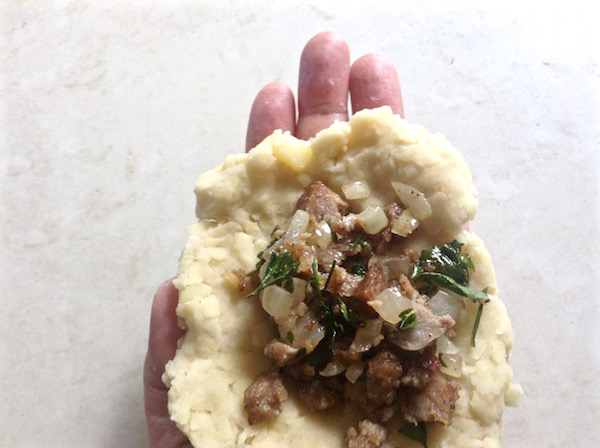 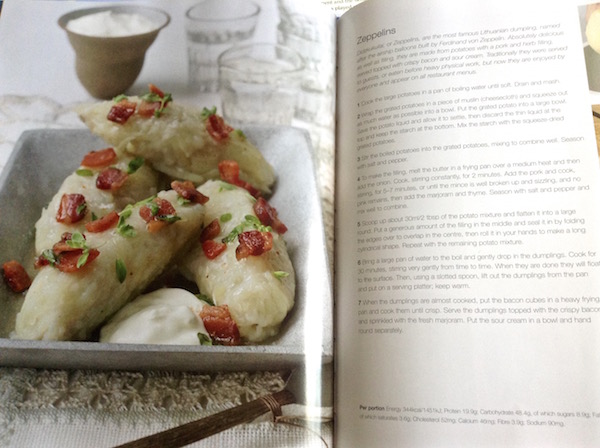 This is how they look in the book!  You can see why we fell in love with the idea of serving these adorable Baltic balloons.

My first few Zeppelins exploded in the cooking water so I added extra potato starch to the dough and that seemed to help hold together.  I also read that adding cornstarch to the boiling water helps them keep their shape and gives them a glossy coating.

Many thanks to My Food Odyssey for more cepelinai advice—I wish I would have found this site before I attempted mine!

Either bake or peel, cube and boil until fully soft:

Let cool, then run through a ricer or mash very well ensuring there are no lumps.

While those are cooling, prep the raw potatoes.  Peel and finely grate with the zesting side of a box grater, or blend in a food processor:

Wrap in cheesecloth and thoroughly squeeze the liquid into a bowl—this may take a number of squeezes.  Pour off the water and save the potato starch at the bottom.

To prevent the raw potato from turning grey, stir in:

a splash of Lemon Juice

Salt and Pepper to taste

Pulse chop this mixture to give it a finer texture that will hold together well.

Stir together in a bowl to form the dough:

the cooked and riced Potatoes

1/2 teaspoon Salt, or to taste

approximately 1/2 cup Potato Starch—add a little at a time.

Mix the dough with your hands.  The consistency is key: it needs to be dry enough to not stick to your hands but not so dry that it cracks.  Keep adding potato starch as needed.

Place a small ball of the potato dough in your palm and flatten to 1/4 – 1/2 inch thick, or around one centimeter.

Spoon a small amount of filling into the center of the potato nest and gently wrap the dough around it.   Shape and roll to form an oblong ‘zeppelin’ shape by using both palms if needed.

Be sure there are no cracks or the dumpling will explode in the water.  If there is a thin spot add a little dough to cover, then smooth it out by running your finger over the seam with a little water.

Stir together in a large pot:

1/3 cup Cornstarch, whisked in while the water is still cool or it will clump

Bring to a boil.

It would be best to test-cook one zeppelin to see how the dough holds together.

Gently drop in a few zeppelins at a time, if they stick to the bottom carefully pry them free with a spatula.  Cook for 20-30 minutes, they should float when done.  Gently remove with a slotted spoon.

I fried a few just to see what would happen!  Nice and chewy like a samosa dough and it held together relatively well while frying. 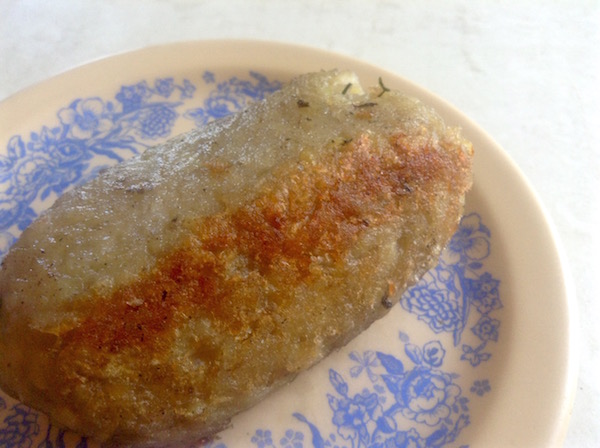 “Real knowledge is to know
the extent of one’s ignorance.”