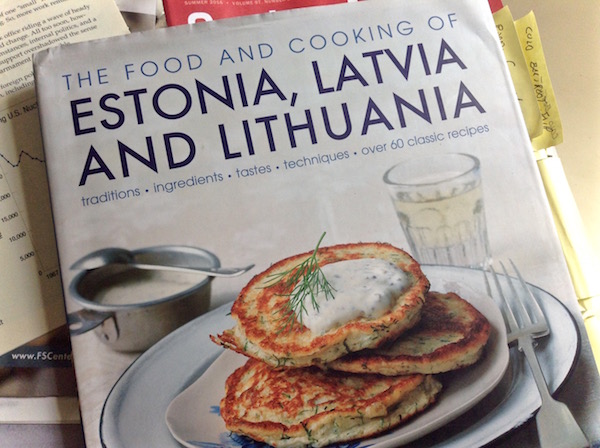 Every time my friend Dennis Larson hosts his Symra evening and dinner he chooses a different Scandinavian country or culture.  Other years have highlighted Denmark, Norway, Iceland, Sweden, Finland, the Sámi, the Vikings, the Faroe Islands and many more.  This year spilled into the northern Baltic country of Estonia with its strong Finnish, Swedish and Russian influences, and the fun began as we researched numerous foods and recipes.  He’s good at stretching my culinary boundaries. 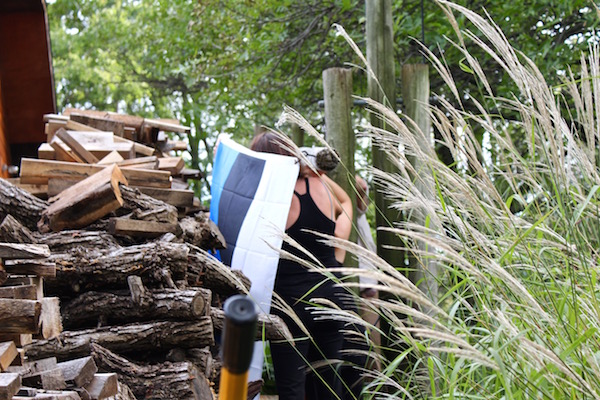 Part of the crew helping Dennis put up the Estonian flag (blue on top) near the woodpile.  Staff never know what interesting task will be asked of them, but all these little (and not so little) details help make the night.  If you’re in need of flags from around the world or just want to browse try Flags Express. 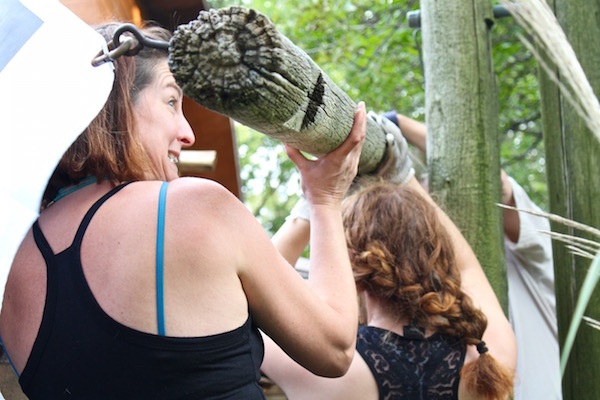 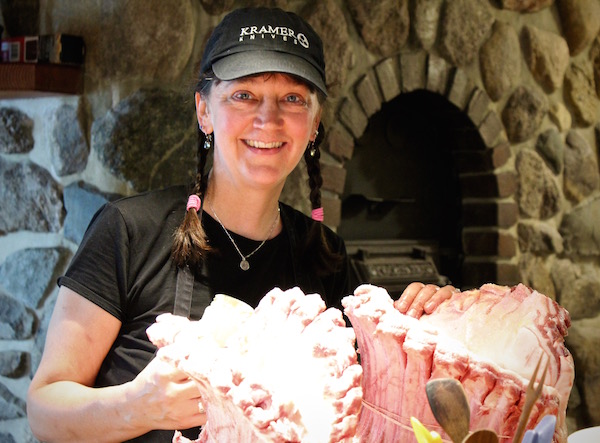 Russian Wild Boar was the star of the evening.

Not to be confused with domesticated pigs gone wild, the Russian Wild Boar or Suidae Sus scrofa is an ancient breed and the ancestor of modern varieties of pigs.  They are extremely hearty, resistant to disease, and can handle harsh winters outdoors.  The meat is darker far more flavorful than pork, check out our friends at Buffalo Gal for more about this sus scrofa.

The boar shoulder was wet-roasted with dried apricots, prunes, juniper berries, herbs, onions and wine—it slowly cooked for 10 hours resulting in fall-apart tender scrumptiousness.  The crown roasts were a fun show, I cooked two in the oven and two on charcoal grills.  If you can fit them in your grill it’s definitely the tastier option.  The giant ones in the oven filled the roasting pan with melting fat…and overflowed into the bottom of the oven requiring an entire roll of paper towels to mop it up.  Just all part of the full moon mayhem. 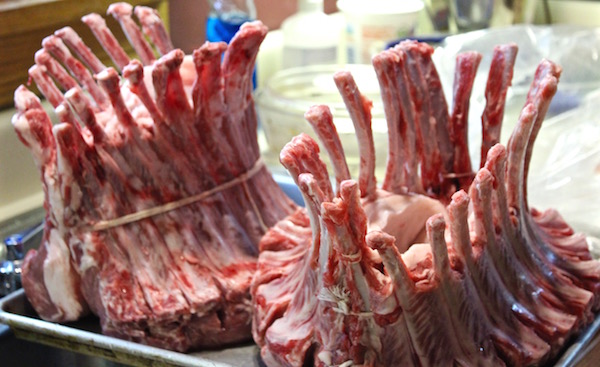 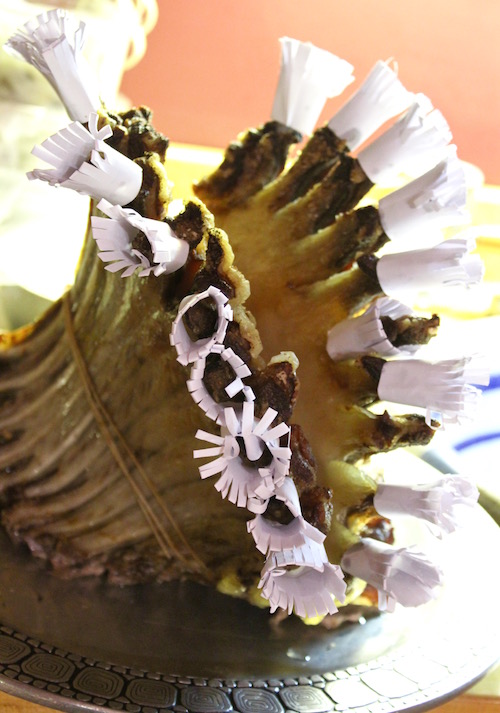 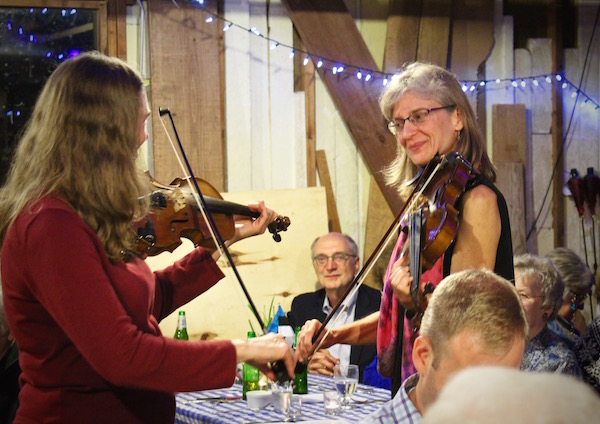 Did I mention full moon mayhem?

It has been a summer of not just rainstorms but deluges with flooding and that week was no exception.  Our friend Dana secured the rain-cover plastic over the outdoor deck on Thursday so we could be dry while setting up dining tables if it rained on Friday.  Thursday night gave us nearly 2.5 inches of rain which caused the water to pool in the plastic and its weight collapsed the rebar supports holding up the plastic.  Yes, bent the rebar!  Friday morning was a scramble to clean up the mess then figure out a new location for the meal….Dennis’s garage.

Garage-Chic is in, no?  It is now.  Large tools cleared out, sparkly lights moved inside, a little sweeping, and voilá we had a dining space no matter the weather.

The afternoon skies were clear so we moved the appetizers to the deck where the dinner normally has been and would have been had there still been the plastic rain cover.  Perfect.  All was beautiful, the guests arrived and were gathered and eating and enjoying the September eve.  Then a few minutes before people were to move to the garage for dinner… the deck (which had been scheduled to be rebuilt but hadn’t happened yet) gave way.  Flat turned to slant with everything sliding downward, we lost some appetizers, glasses, and bottles—people were a bit in shock but no one was hurt.  Wowza!  Never a dull moment.

Our lesson for this full moon lunar eclipse day?  Count your blessings even when they seem like curses.  Thursday’s rainstorm and the collapse of the rebar-rain-cover-structure forced us to move the dinner off the deck, and though it seemed like an inconvenience it saved us a massive mess—the deck would have given way while people were eating dinner.  We marveled about that for hours.

The deck, taken the next day: 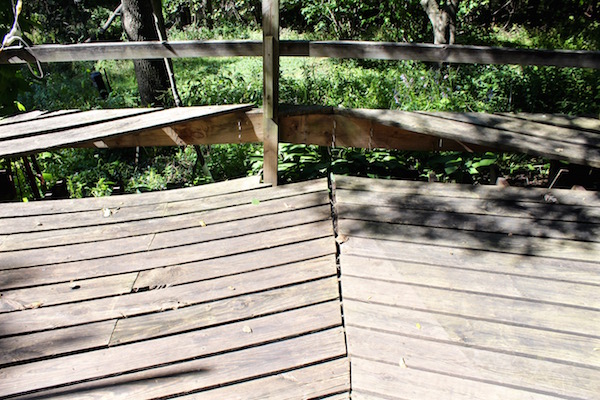 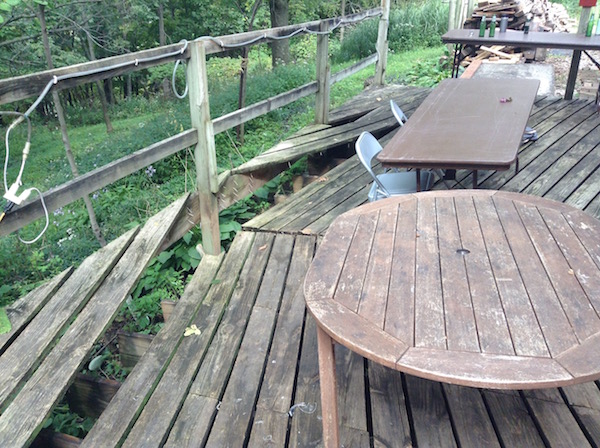 Everything went more smoothly after this excitement.

Now back to the food…

You’ll notice over the next few months that many of the dishes/recipes from the menu will be featured on this blog.  It will be an Estonian autumn!

What amazing experiences our friend Dennis gives us.

And many thanks to Patsy Martinson for keeping her wits about her and taking photos of the whole event!

I’ll end this post about our magical evening with a few more Boar photos below.  The squeamish might want to stop right here and think about flowers and butterflies… 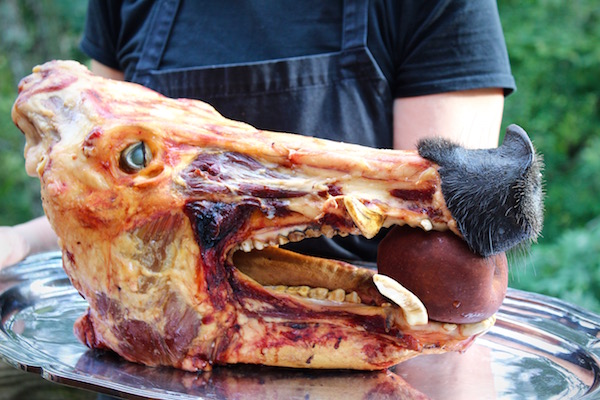 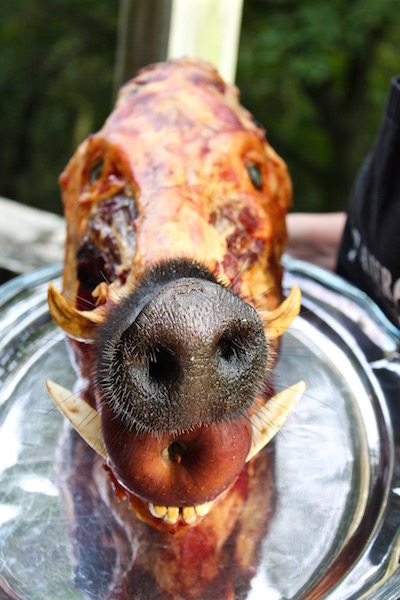 Mike and Valerie from Buffalo Gal brought along a friend. 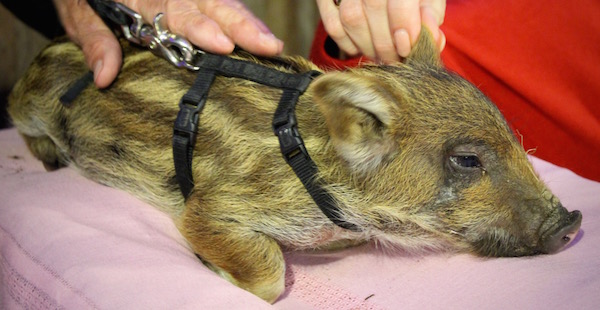 6 thoughts on “An Estonian Dinner”